skip to main | skip to sidebar

The Incredible Chandeliers and Ceilings of The Breakers Hotel

The Breakers, first called The Palm Beach Inn, was originally opened by Henry Flagler to accommodate travelers on his Florida East Coast Railway.  It burned in 1904 and again in 1925 but was rebuilt by Flagler heirs. The replacement was designed after Villa Medici in Rome.  It is spectacular!

Built by 1200 laborers and artisans who worked round the clock, it reopened in 1926 scarely eleven months later. It was known as America's finest winter resort.

On a recent visit there I was in such awe of the artisty and interiors it is just not possible for me to not share it with you. The drive up to this magnificent hotel was impressive but nothing compared to what lay inside those doors. 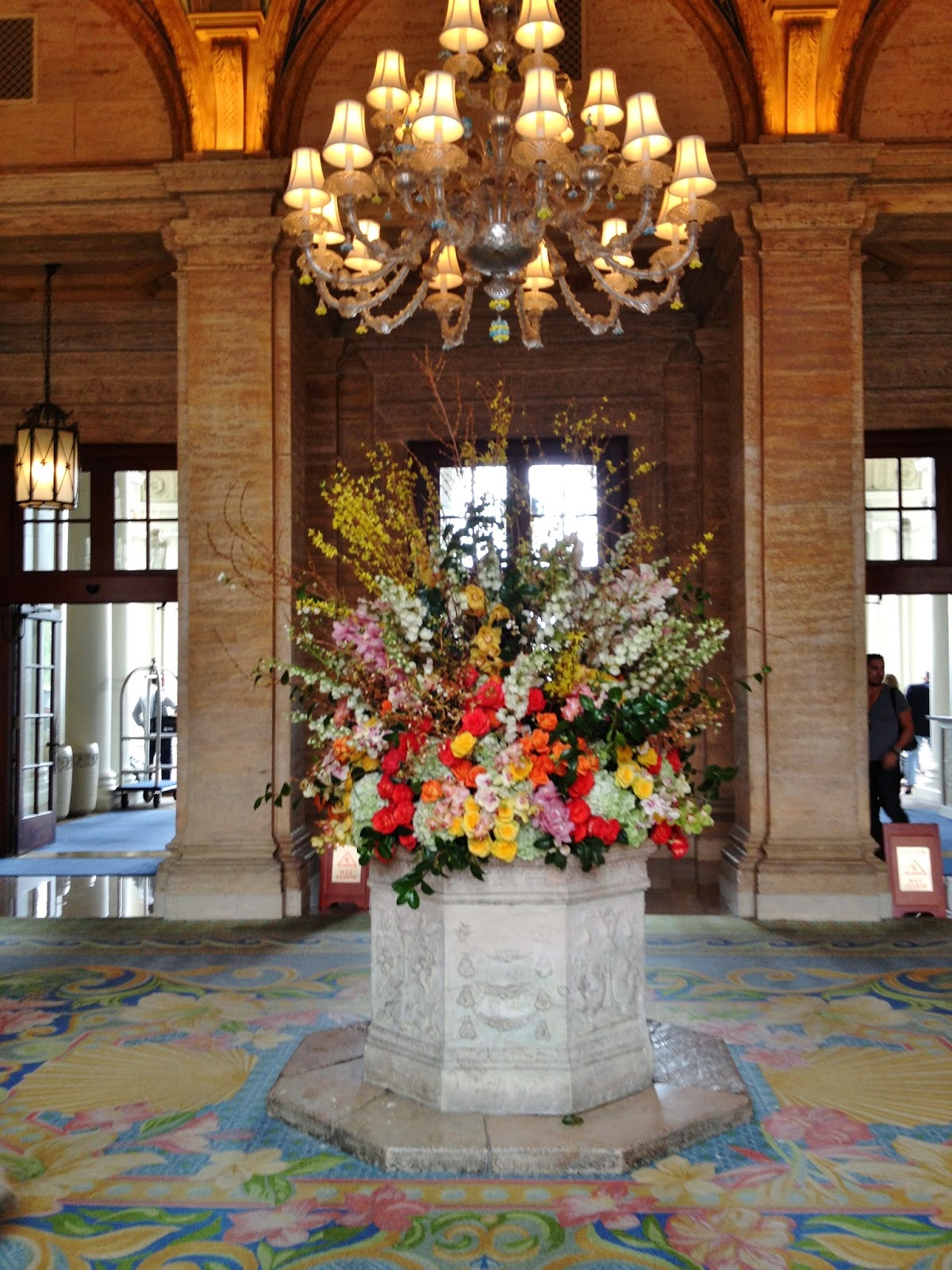 I have never seen flowers like this.  I can't even call it an arrangement.  It was a breathtaking floral display.  And then I looked up...... 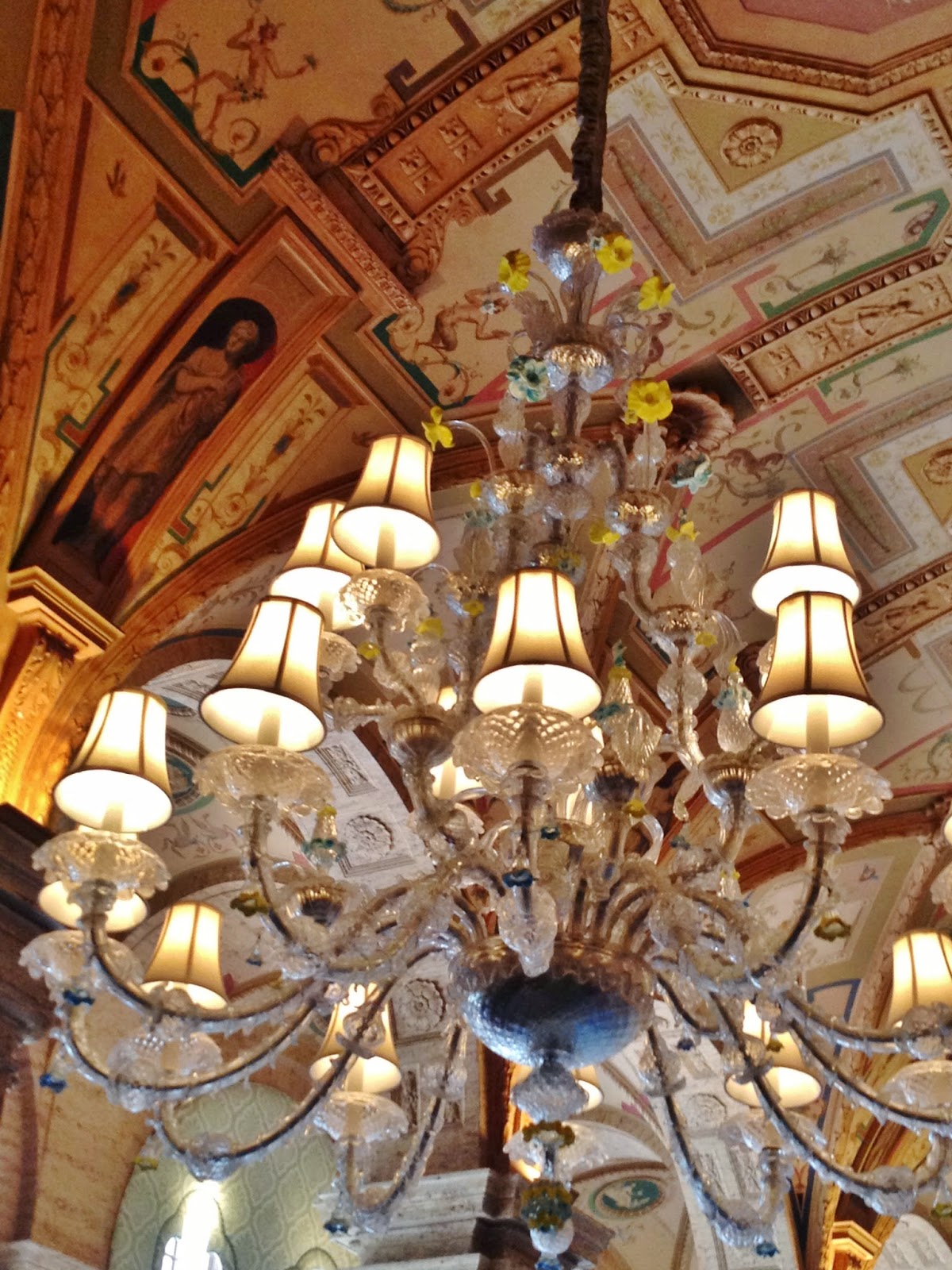 The crystal chandelier took my breath away too!  Not only was it gorgeous but it was huge.
And, there was not one, but more just like it. 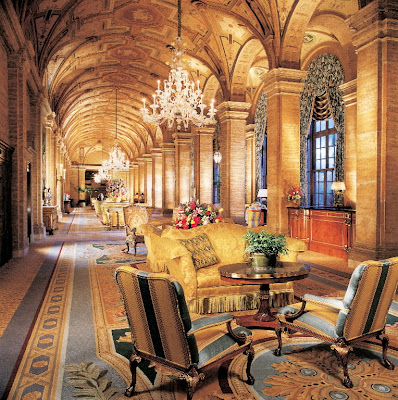 And what about the ceiling?  I was starting to feel totally transported to another time and place. 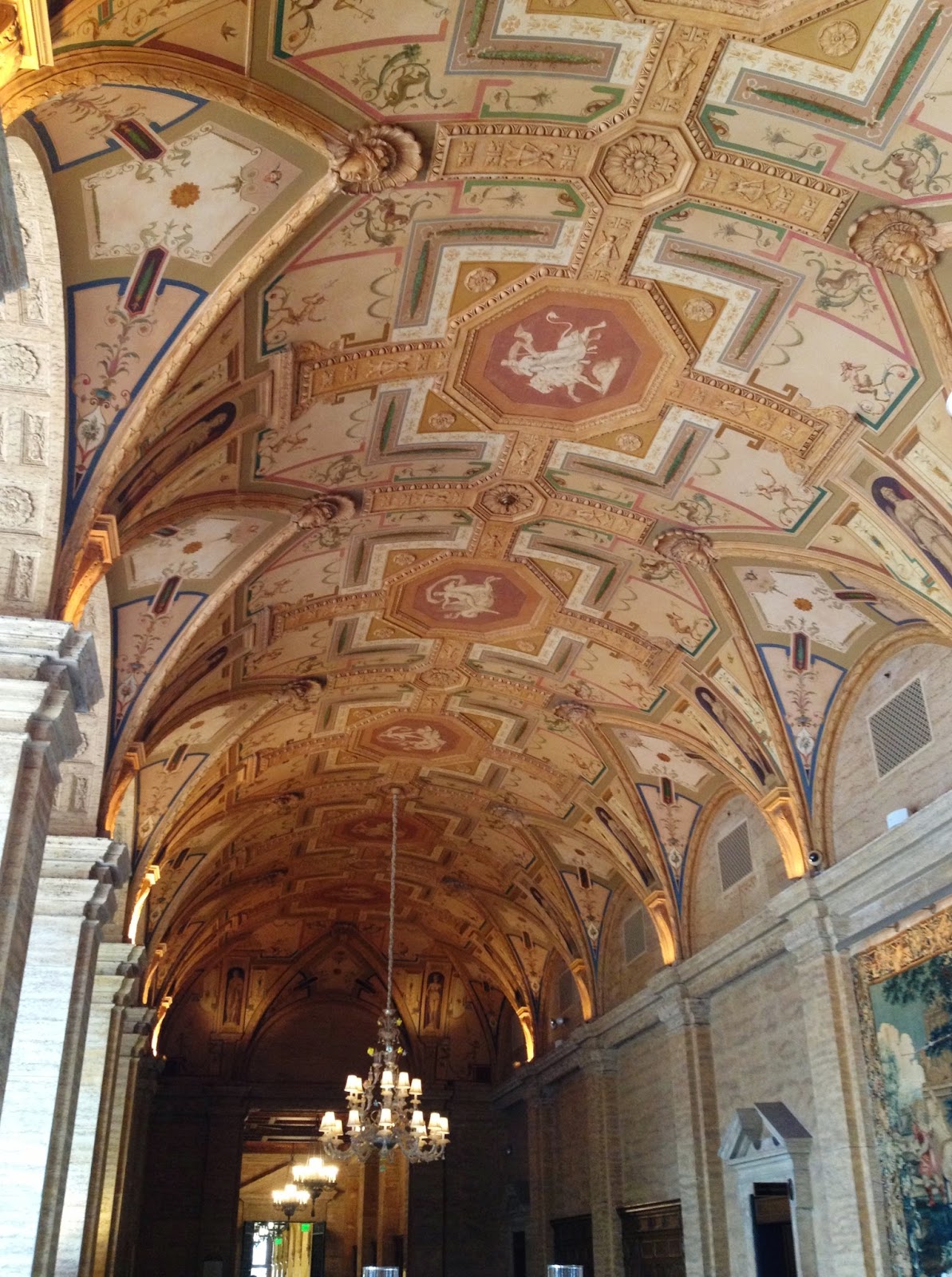 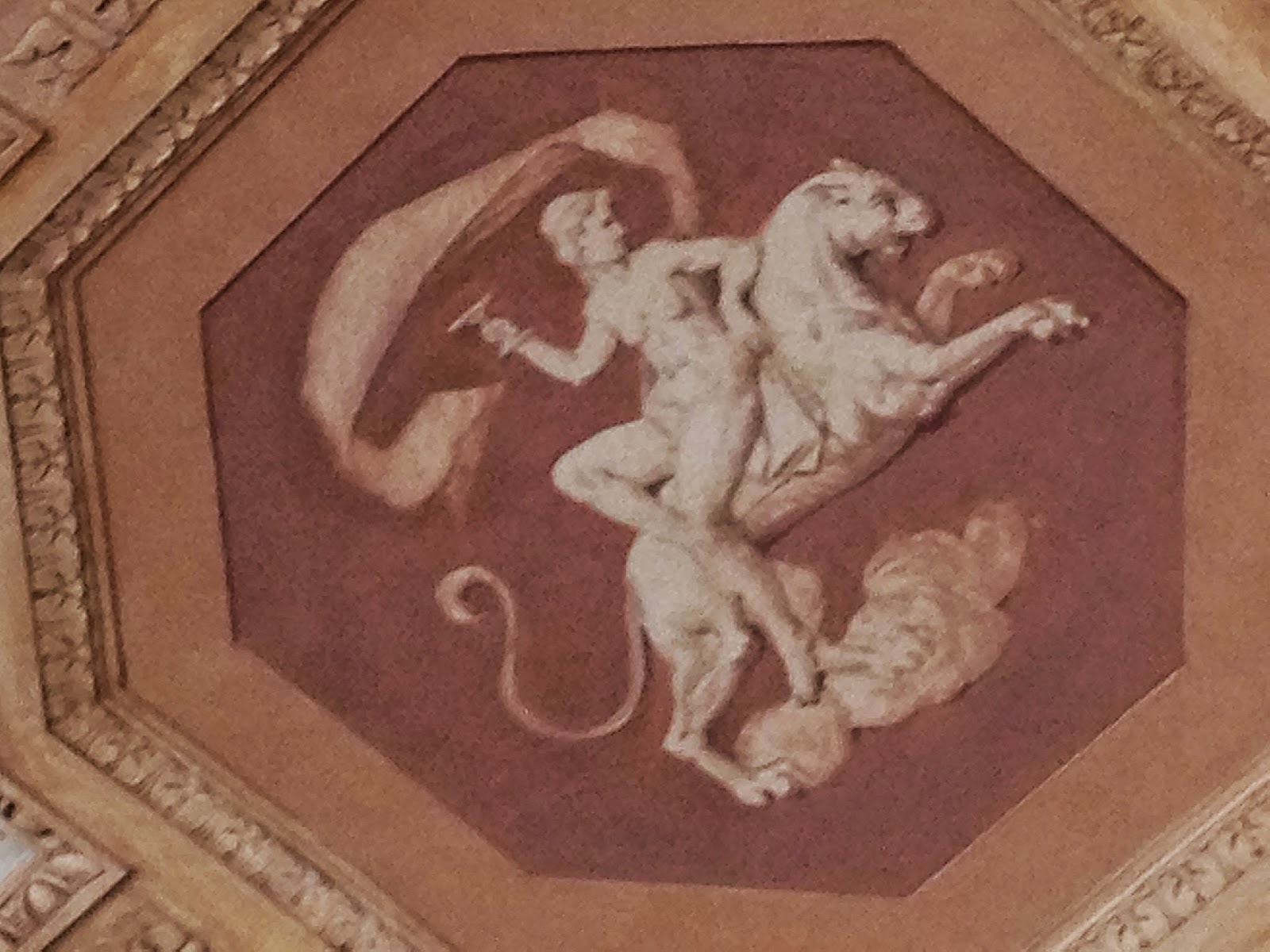 The ceiling in the 200 foot lobby was painted by Alexander Bonanno, a classically trained
New York City artist. 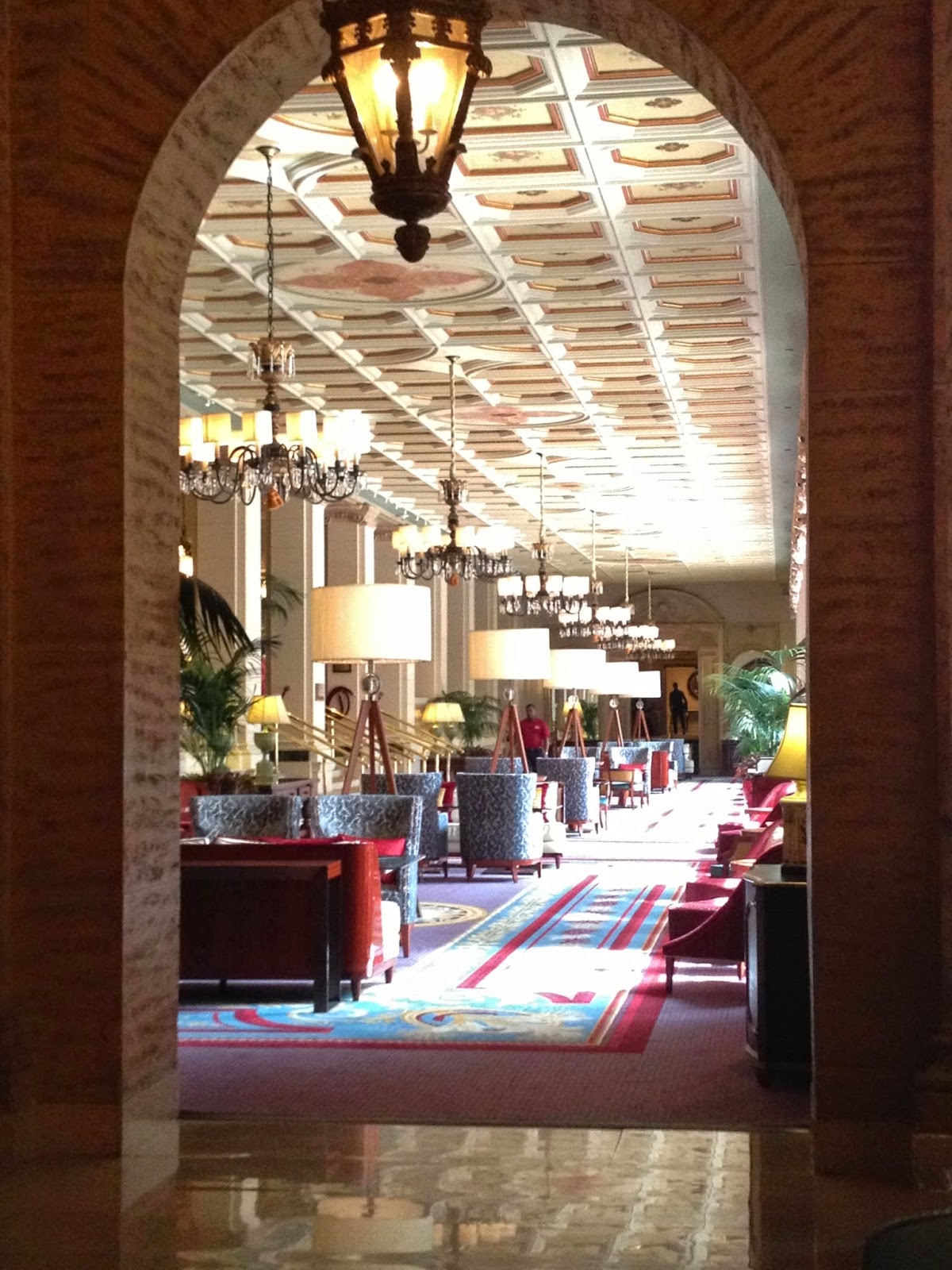 Everywhere I looked there were more incredible chandeliers and ceilings than I had ever seen in one place. The loggia above sits adjacent to the HMF Lounge.  In the day time it is flooded with natural light.  The decor has been updated with the addition of overscaled floor lamps but nothing can take away from the effect of the multiple beautiful chandeliers and ceiling which you can see close up below. 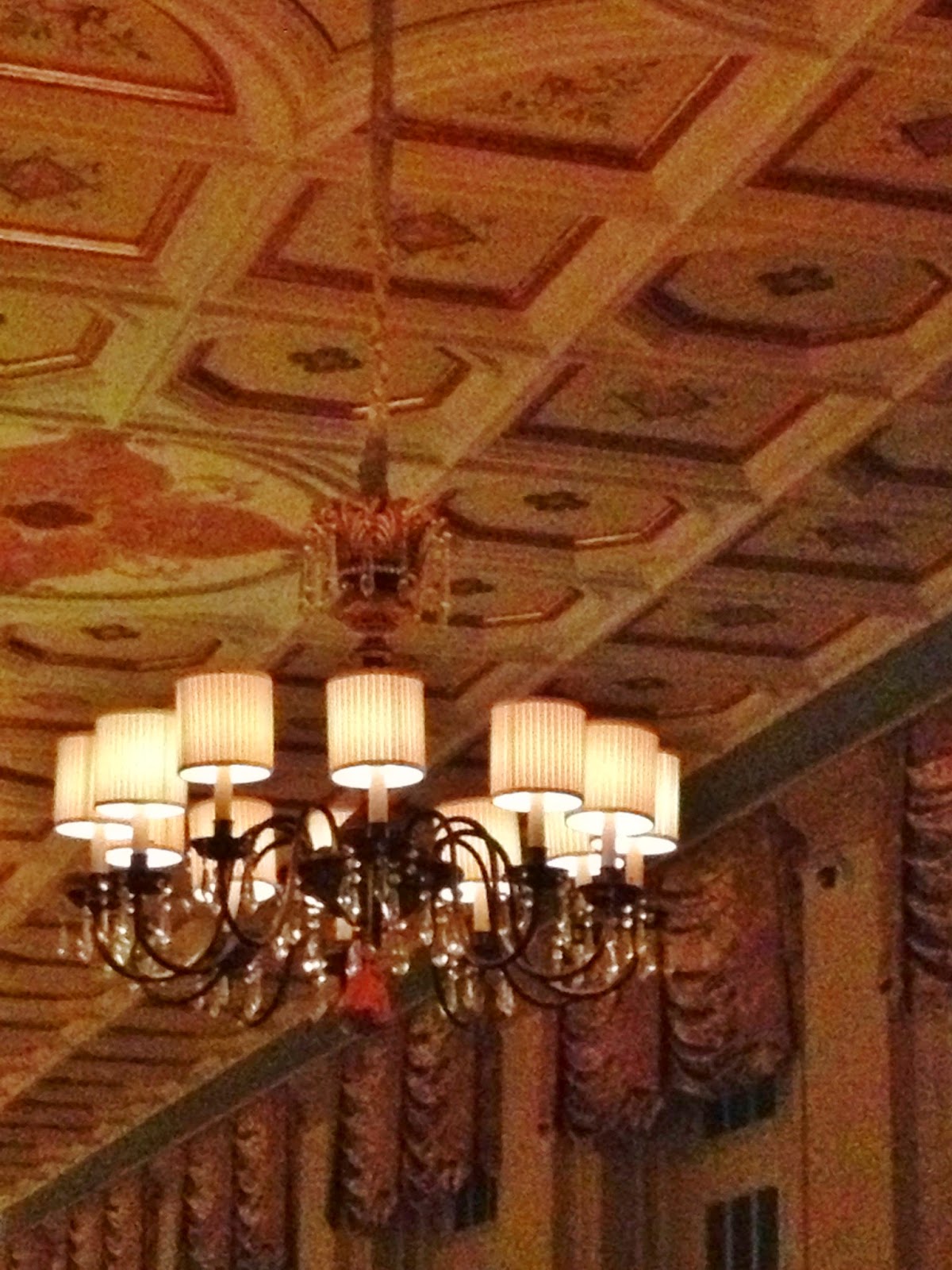 As I walked up the steps leading to the HMF Lounge (named for Henry Morrison Flagler) another incredible sight appeared.  A multi-tiered chandelier illuminated another work of art, the ceiling. 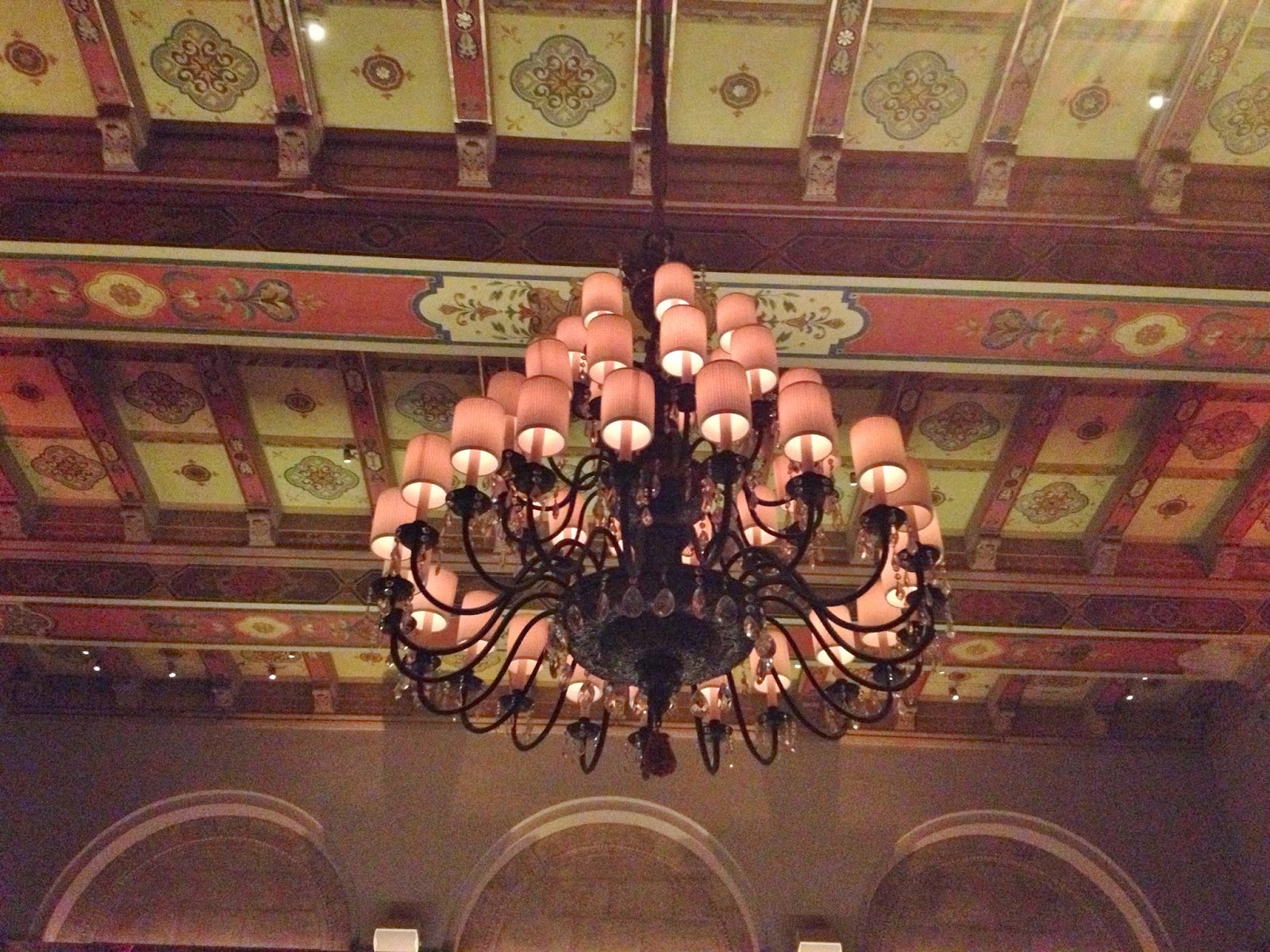 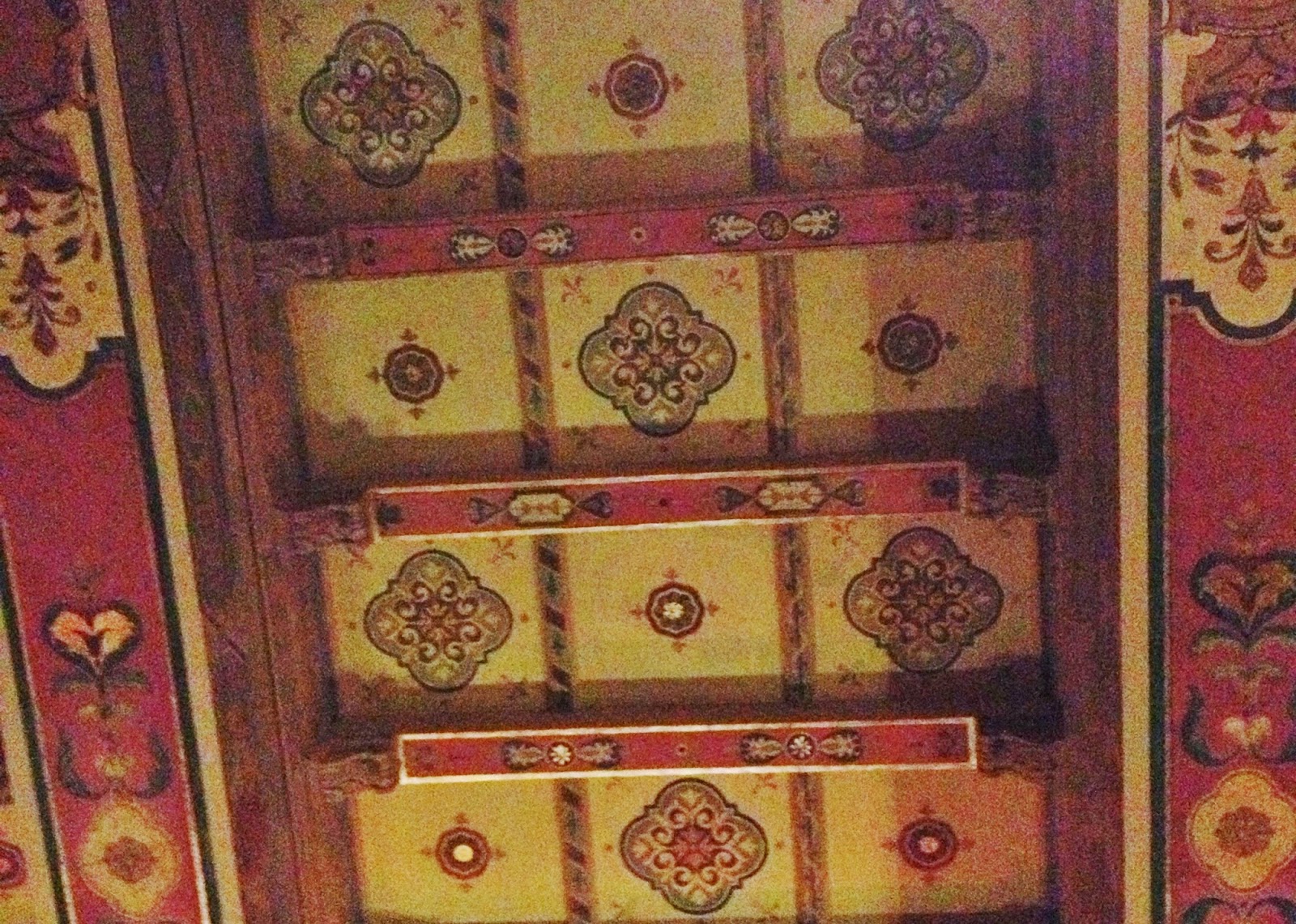 The artist painted both the beams and the ceilings.  Below you can see how the lounge has been redecorated to update the look.  While the seating is ok, the carpet  does not with marry the elegance and artistry of the ceiling above. What do you think?  Although at night with the lights dimmed, up tempo music playing and the laughter and voices of guests I hardly noticed.

We were treated to dinner at the Flagler Steakhouse, which is located in the clubhouse of The Breakers Country Club across the street.  This colorful chandelier almost made my eyes pop out.  The glass shades are actully red.  What a statement it made.  Seeing it repeated in the mirror made it twice as nice! 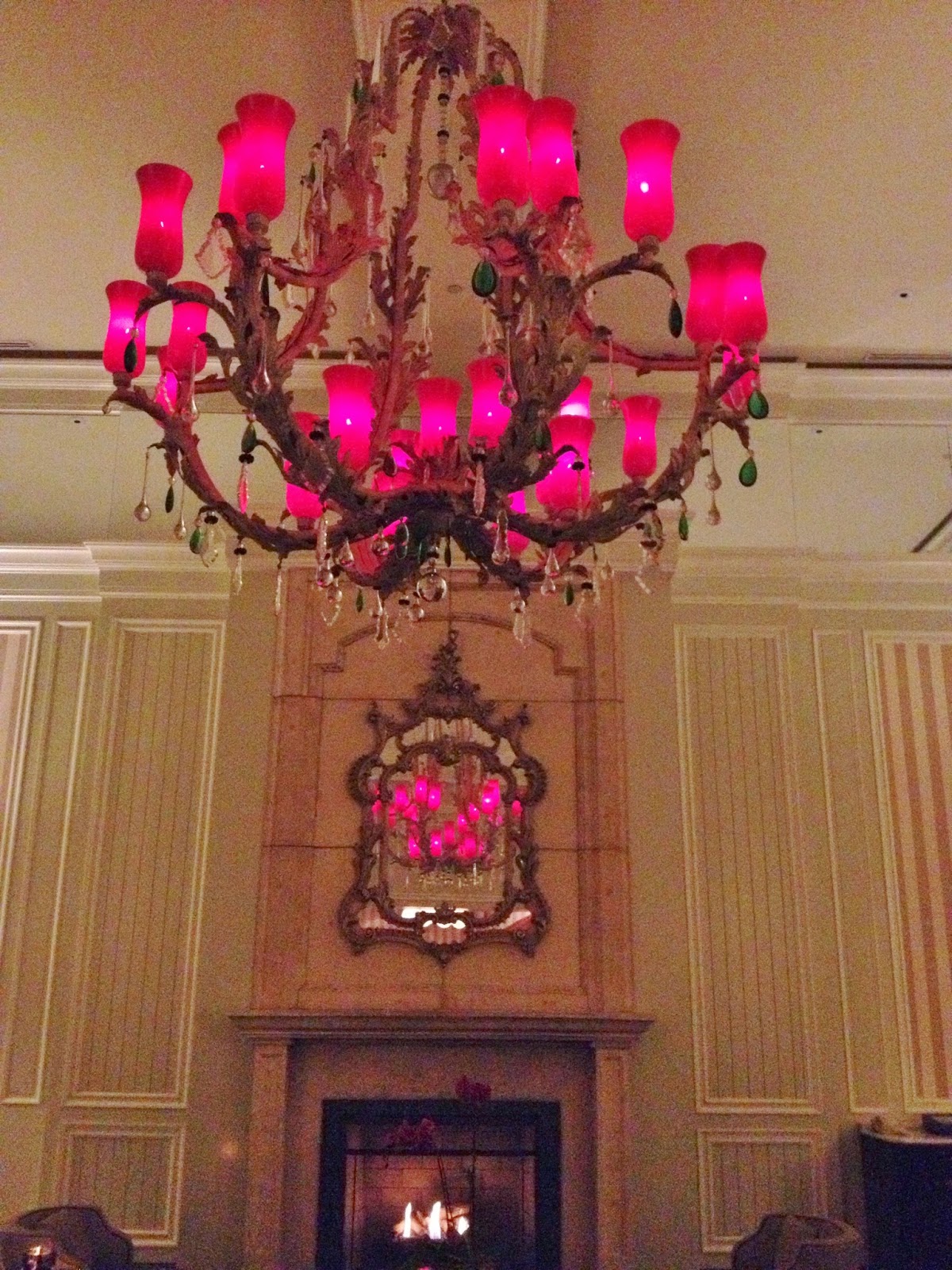 The Breakers is famous for many things and among them is The Circle Dining Room.  It was created to take advantage of the ocean view and is one of the most picturesque in the world and I don't just mean the view.  Inside is a feast for the eyes, too.

The detail of the painted ceiling was accented by an incredible round skylight made of sections of leaded glass.
All the lighting was made in Italy.  Once when the hotel management decided a dining room needed more light they contacted the factory in Italy that designed the original.  They dug around in their archives and found the original drawings of that chandelier and made several more to match.


Everywhere I my eyes landed there was a  chandelier, one more beautiful than the next...and they were all different!  I can't even remember which ballroom, loggia, hallway or dining room where this one was hanging. 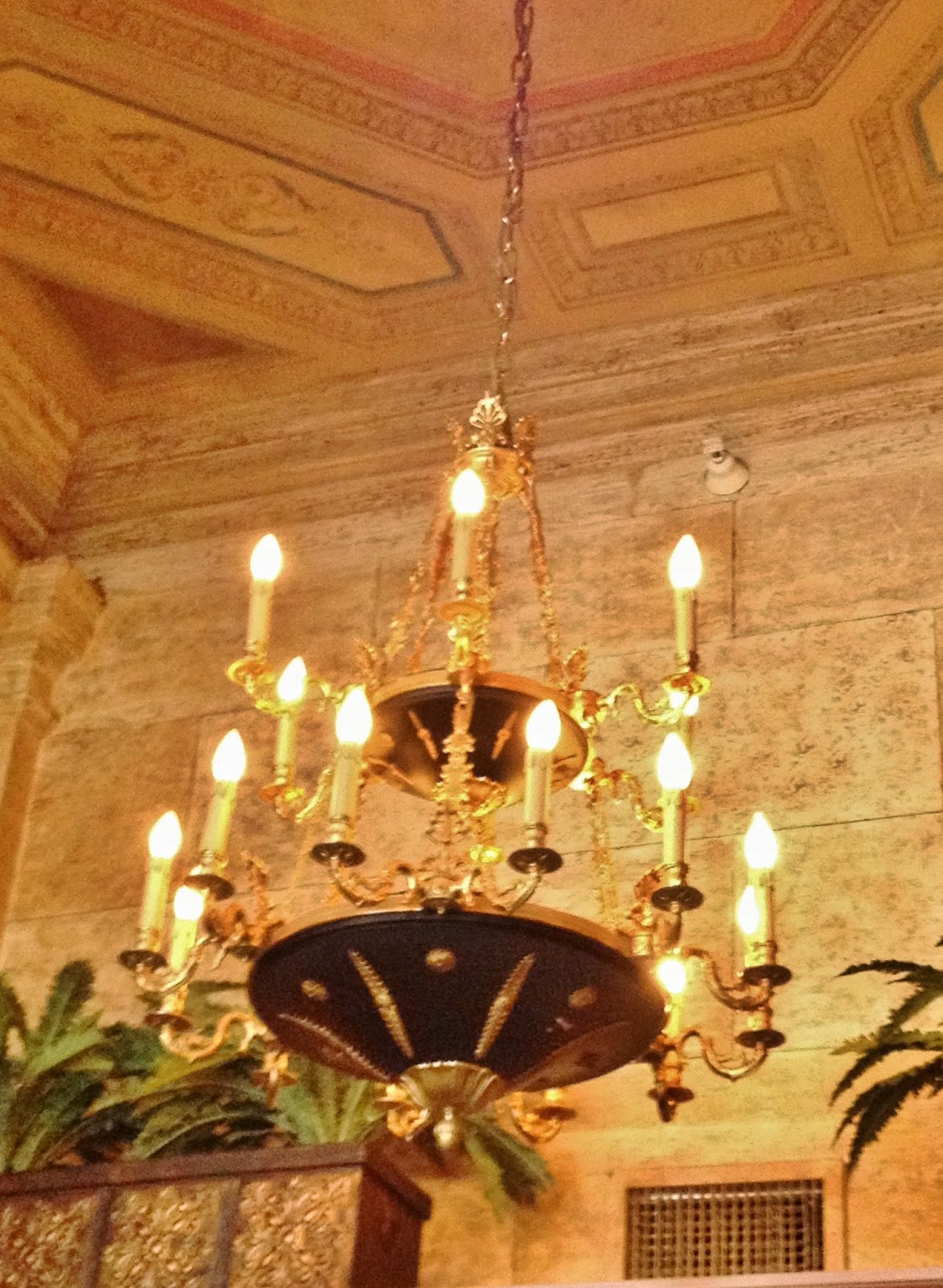 Loggias, a galleries or  rooms with one or more open sides, especially one that offers a view to a garden, were also everywhere.   This one had one of my favorite chandeliers.  It was delightful to see not one, not two, but several as they drew my eyes down the hallway. 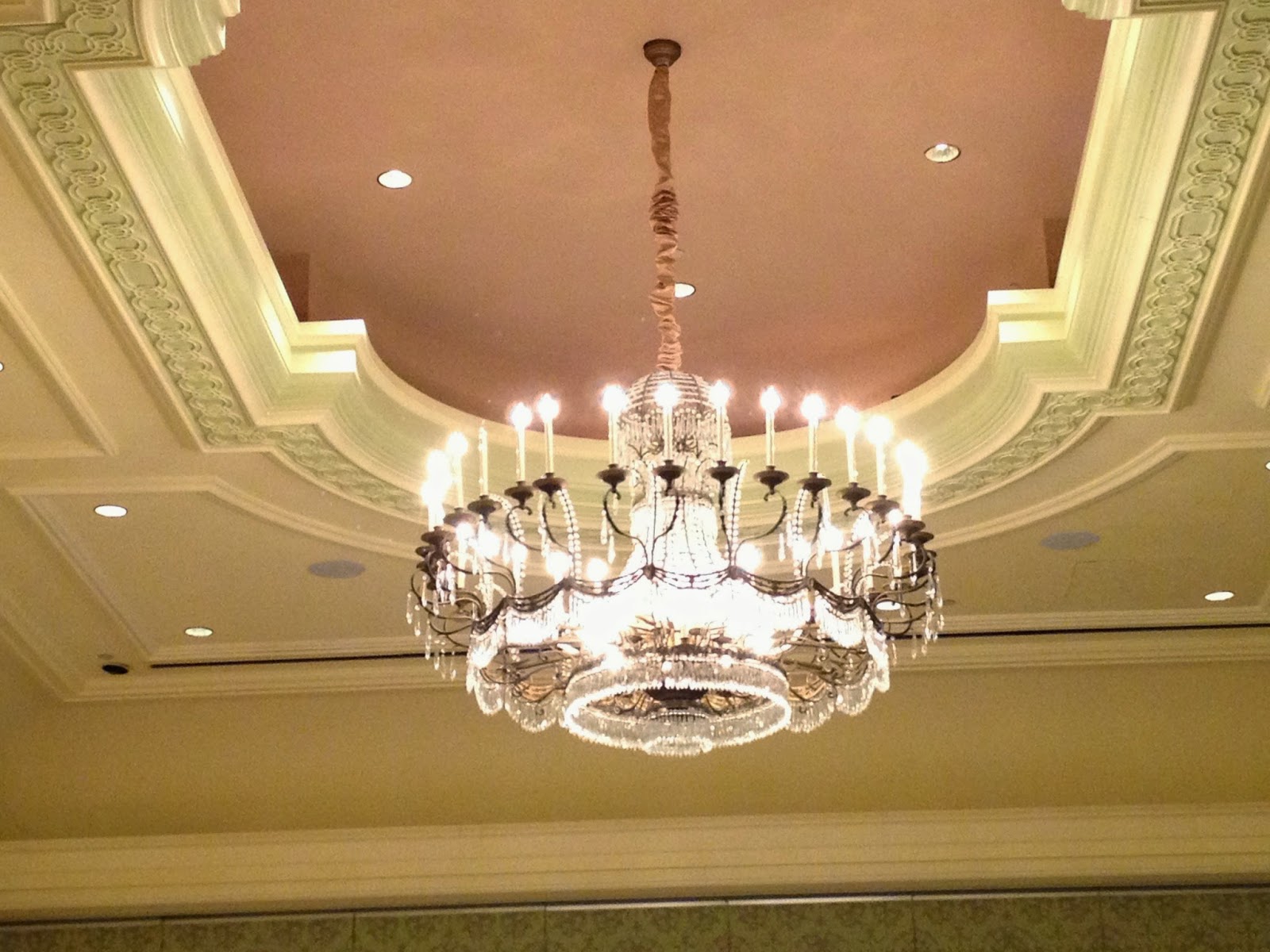 I did not miss the painted ceilings that adorned other spaces because the fixtures showed up so nicely.  The moldings, carpet and French doors with their arched Palladian windows draped with formal swags was decoration enough. (Did you notice the sleeve covering the chain?) 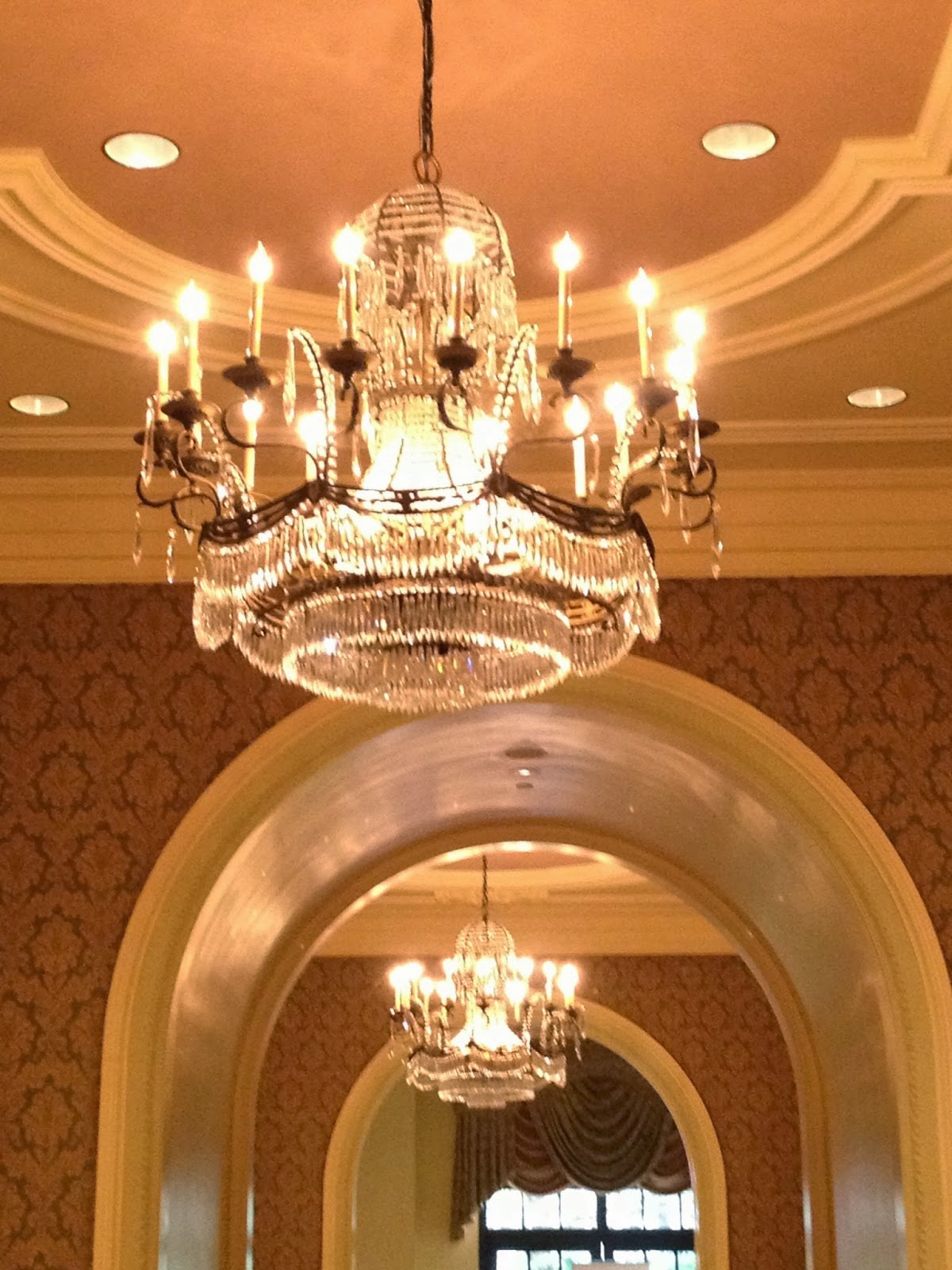 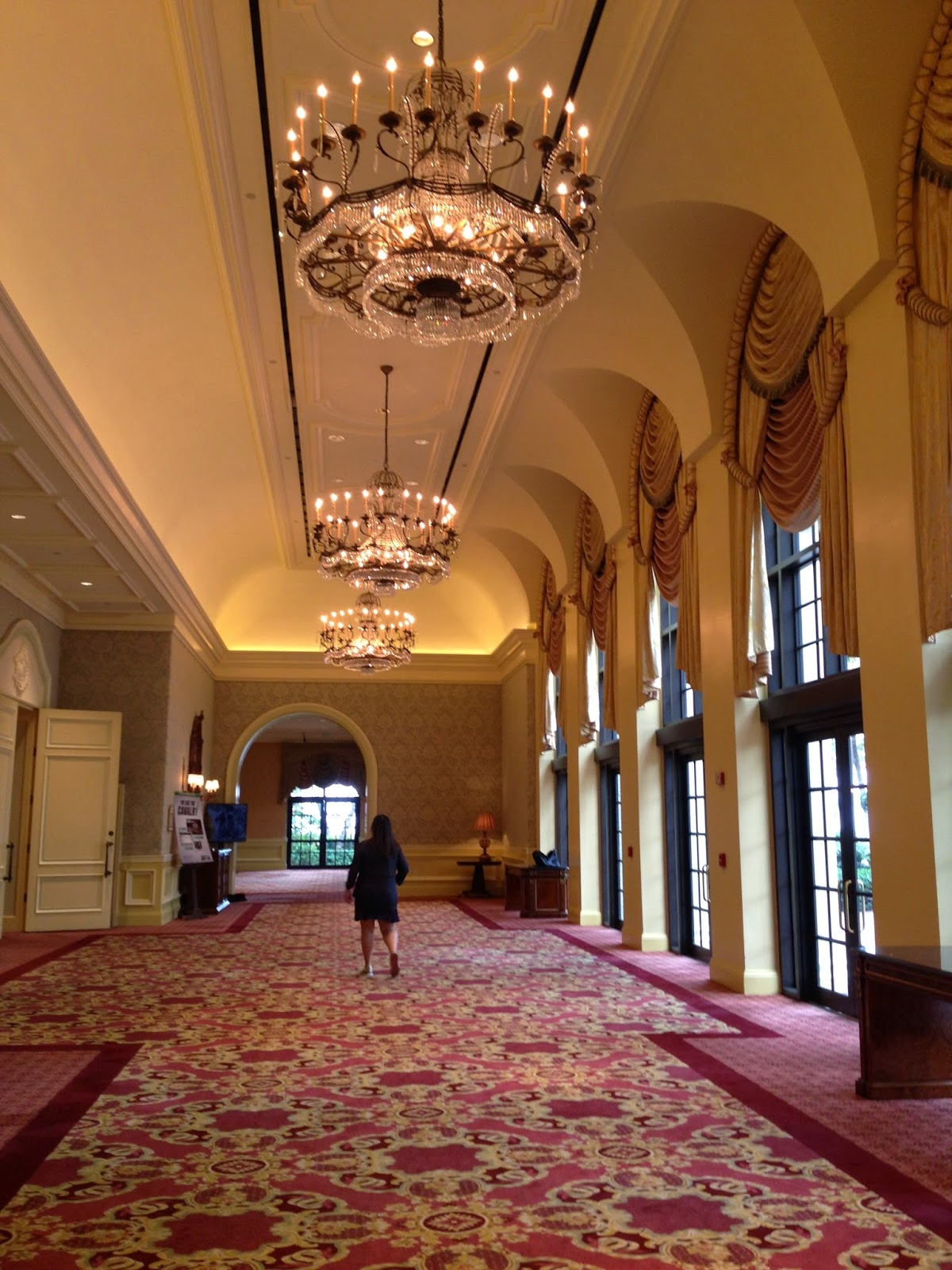 Below is  another elegant loggia.  This one leads to the ocean. 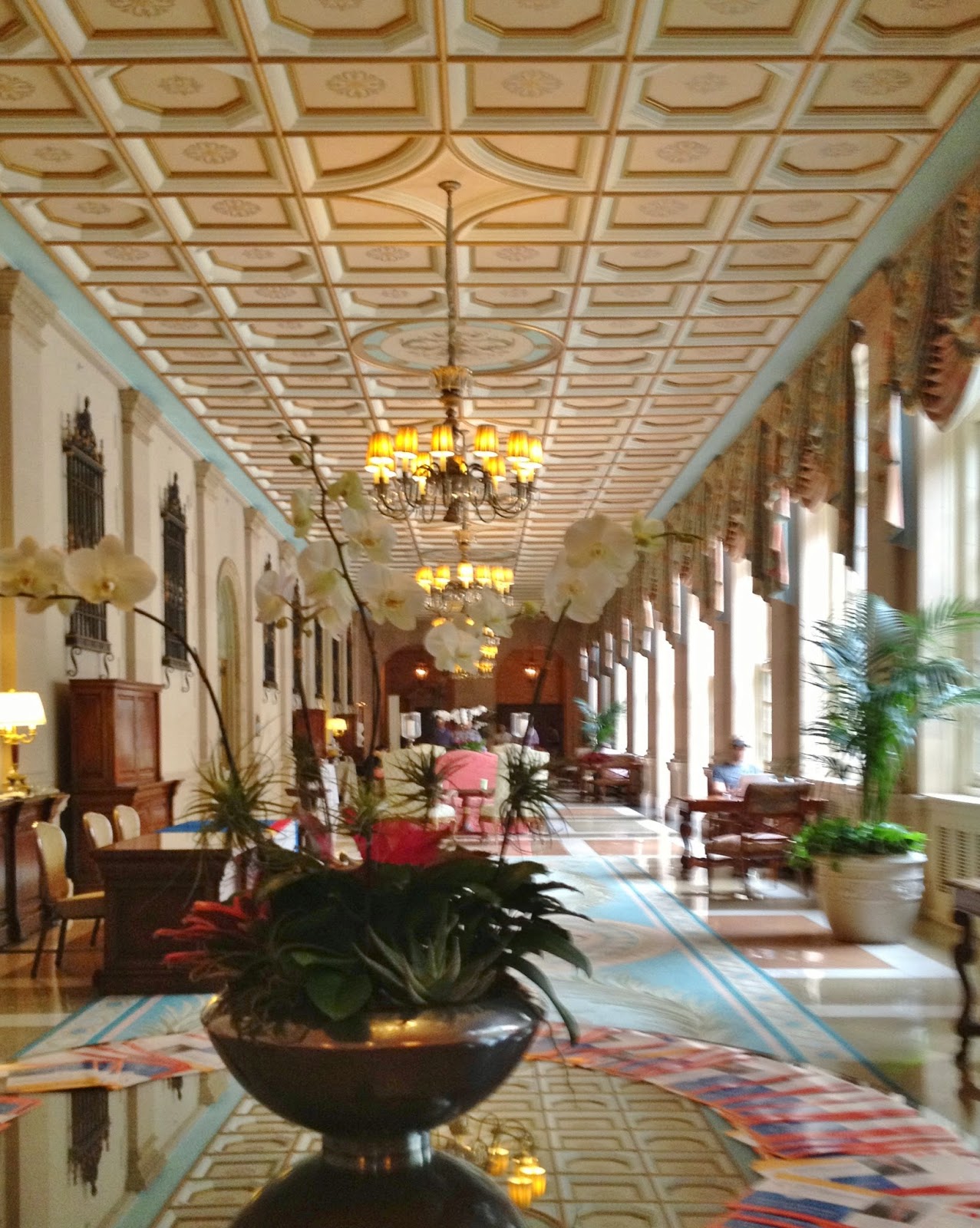 The Gold Room is named for....well, I think you can guess. 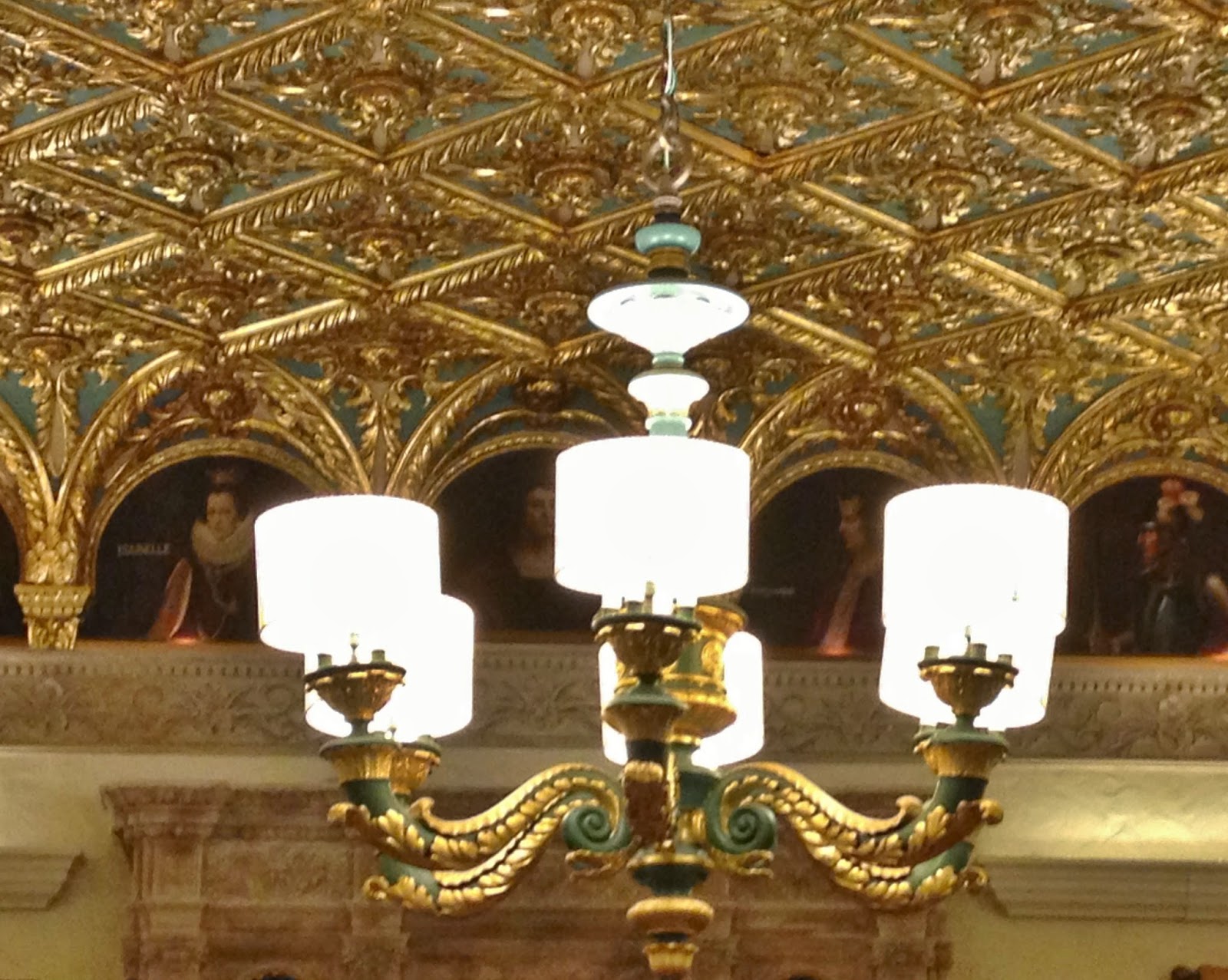 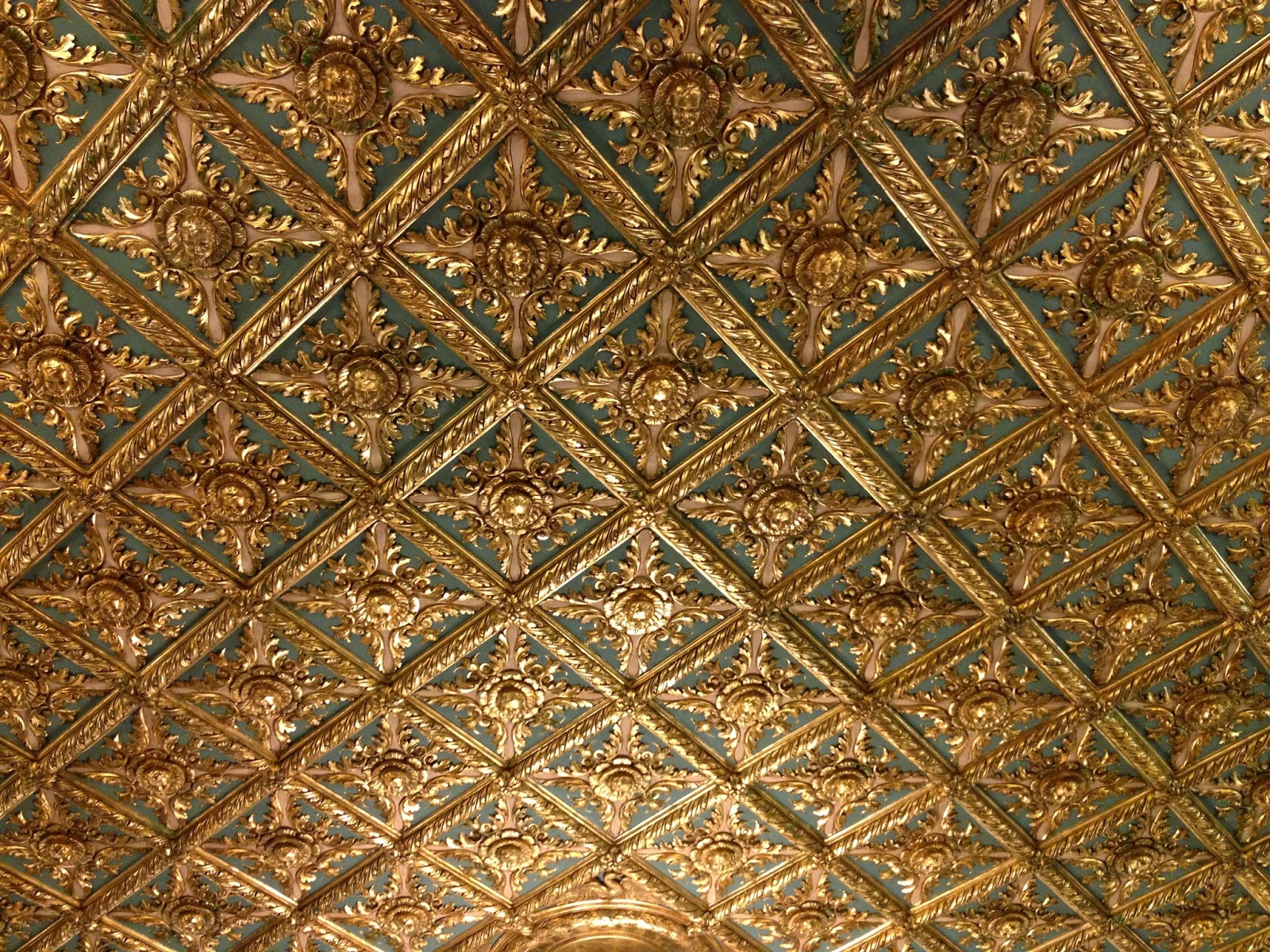 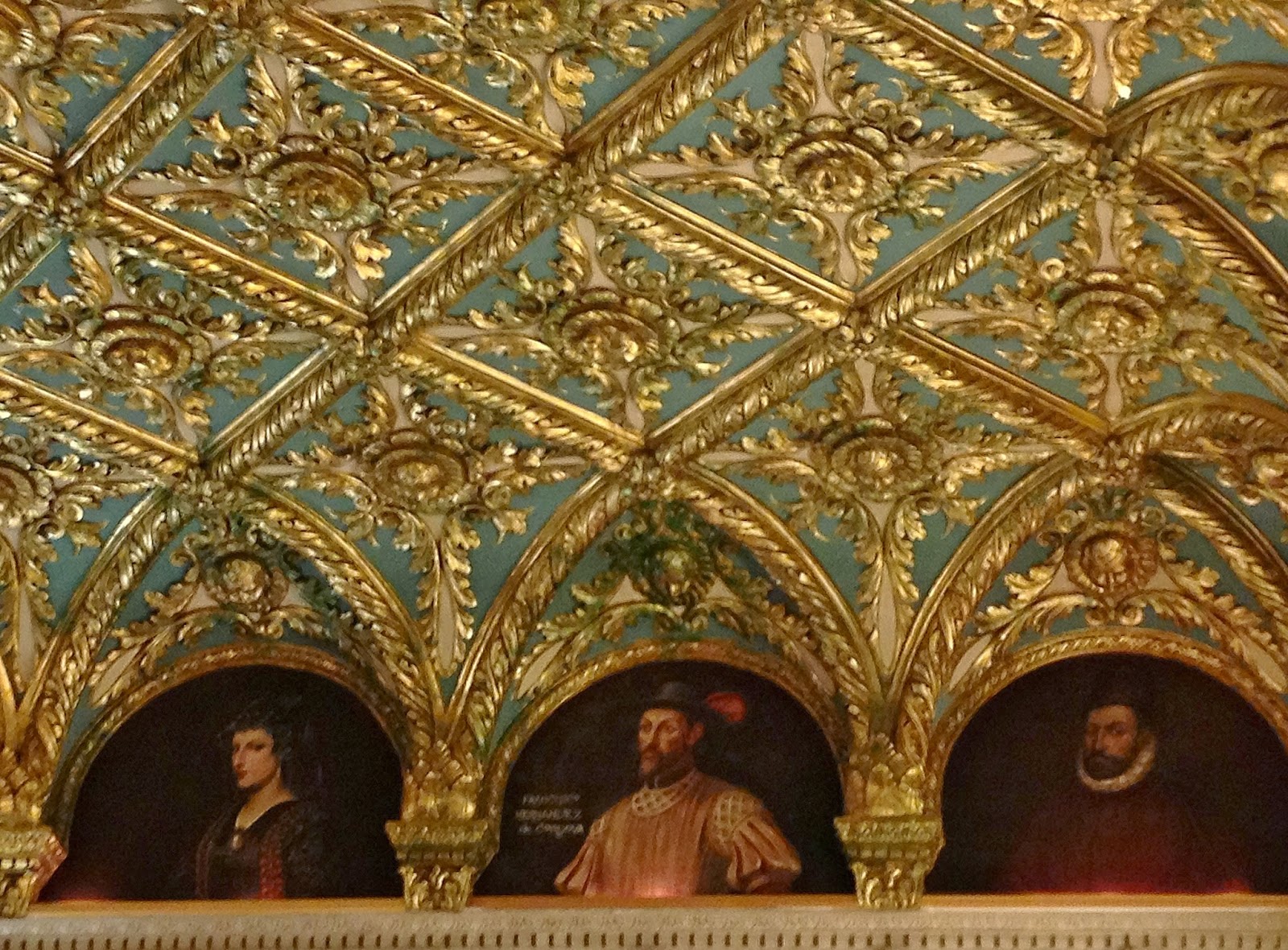 In addition to the ornate guilded ceiling the whole room was surrounded by portraits of  Nobles, Popes, Conquerors and Indian Chiefs.  Today these ballrooms are settings for weddings and business conferences.  I can't imaging trying to concentrate on a seminar sitting in a space as overwhelmingly gorgeous as this.

It was so much fun exploring.  Each time I opened a door I was thrilled.   This ballroom did not look like this when I peaked inside.  It was actually set up for a business meeting.

Of course when I looked up I only saw the pretty ceiling and exotic lanterns. 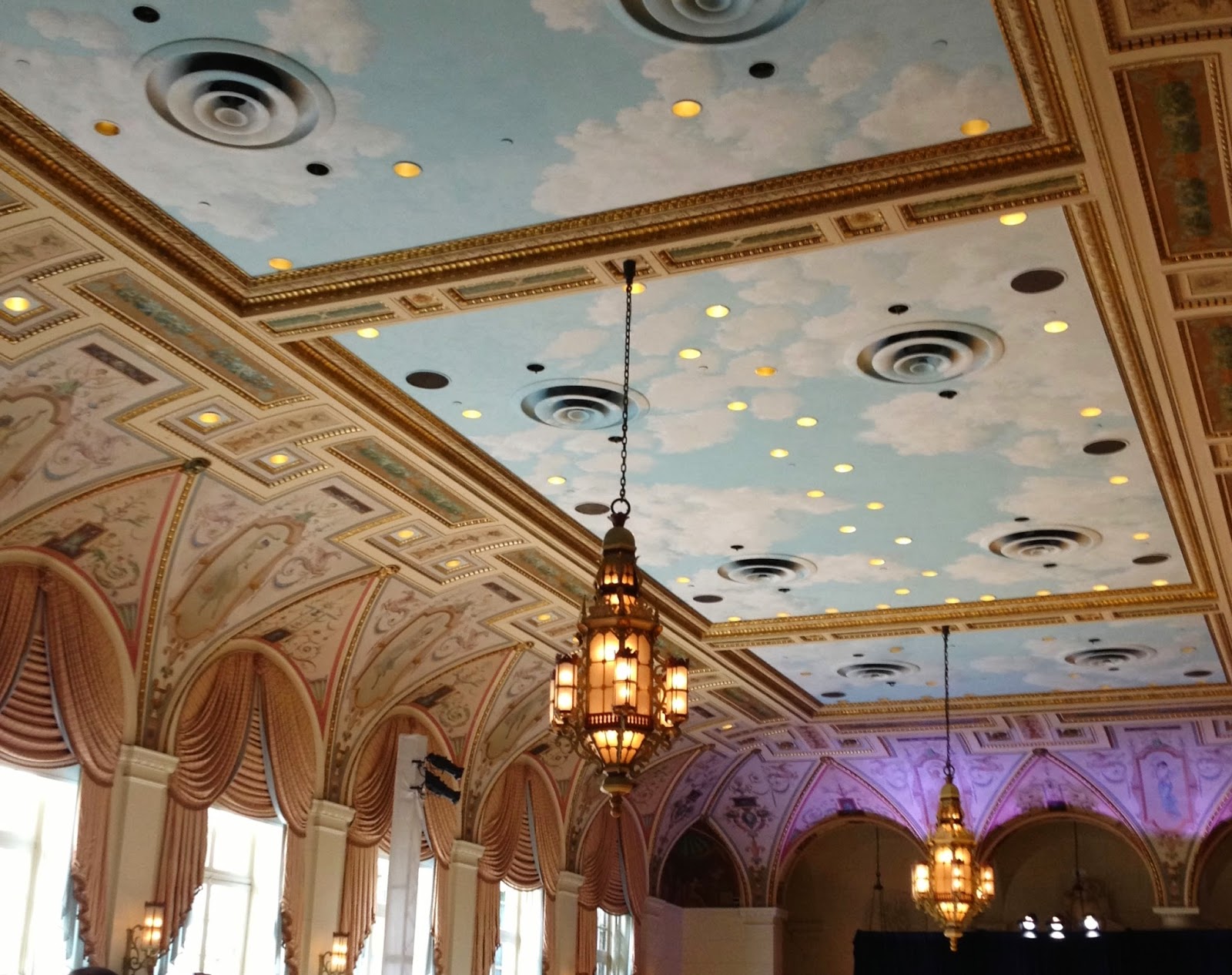 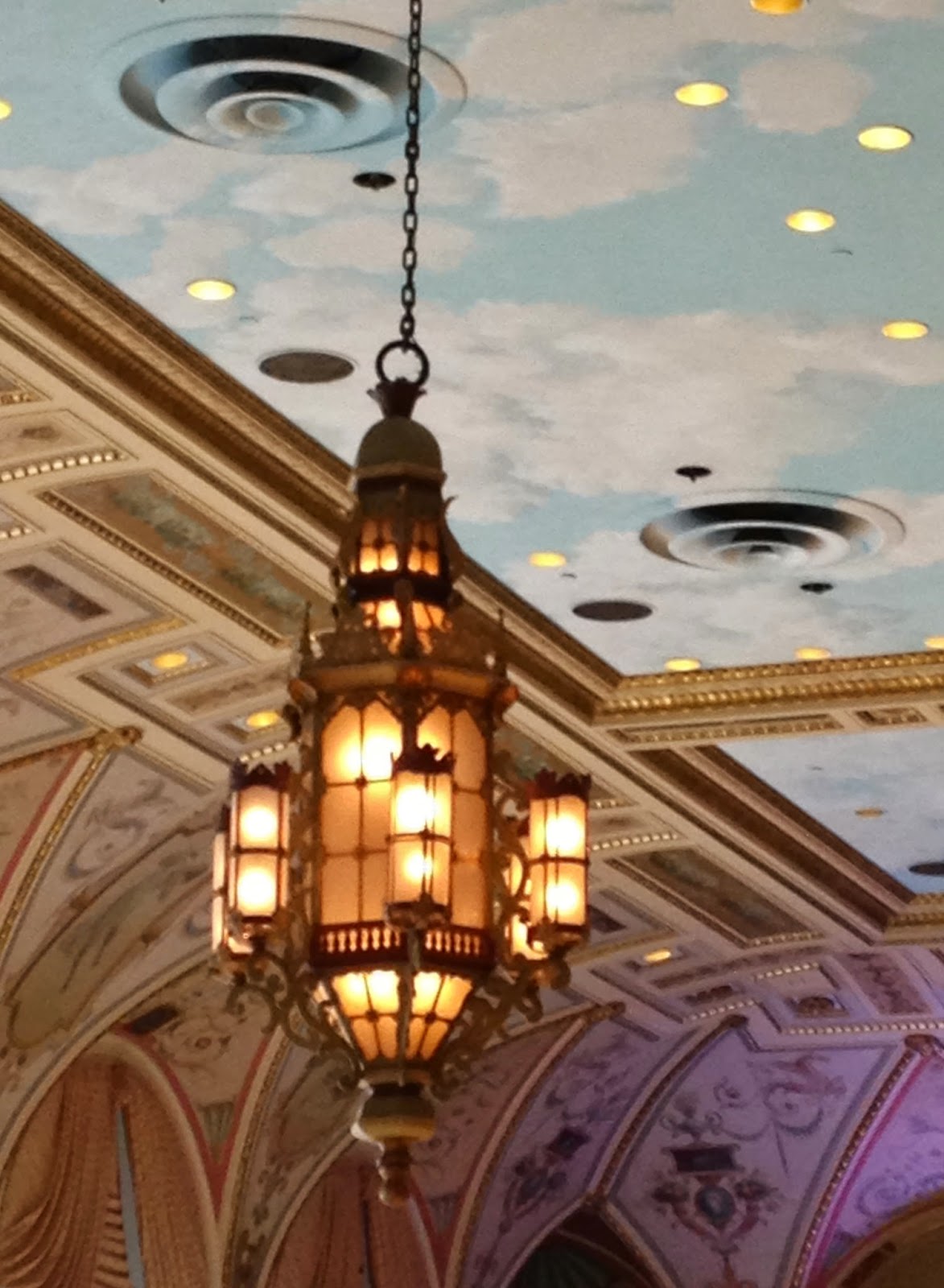 Speaking of lanterns, they too were everywhere. 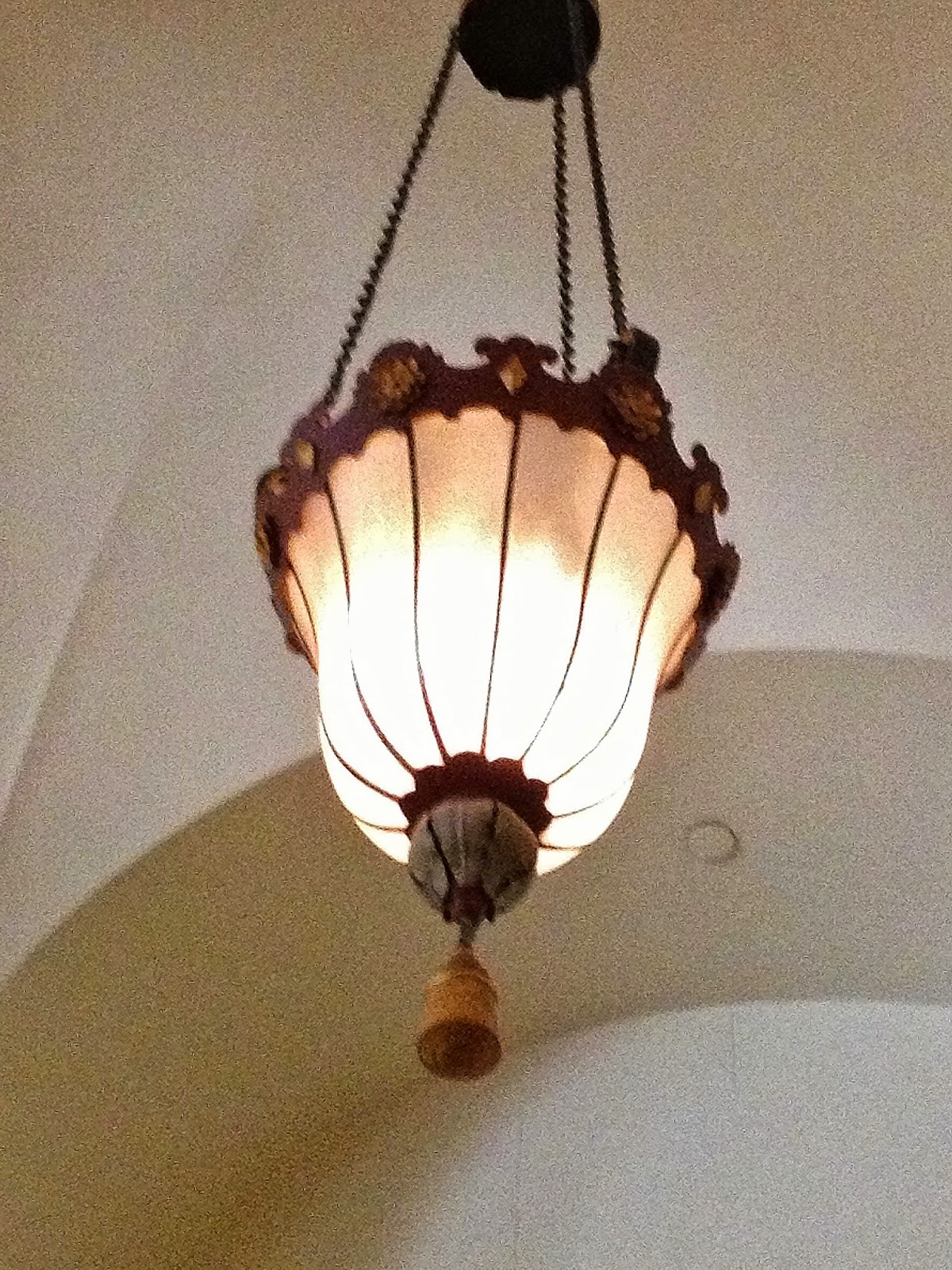 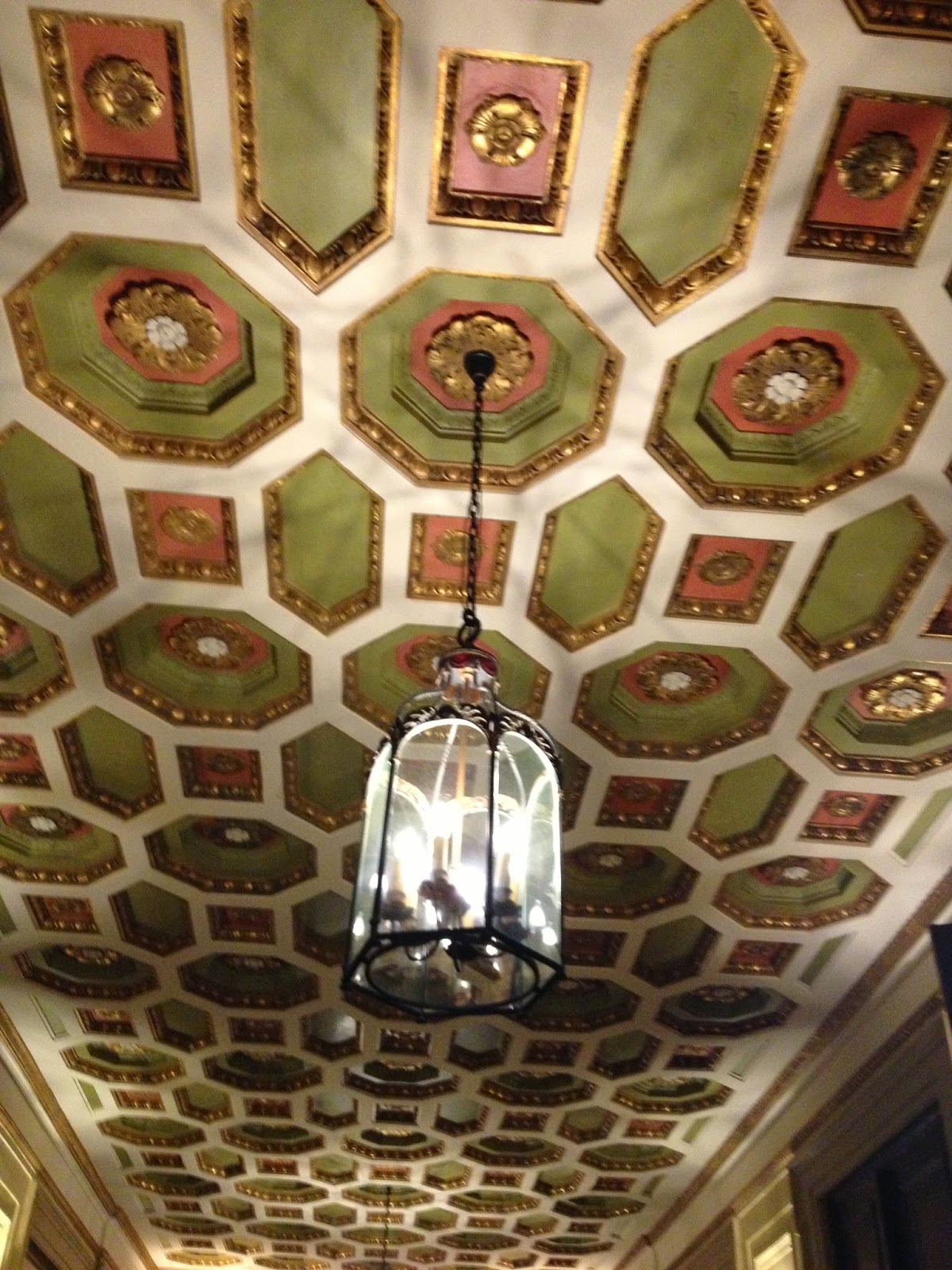 And I cannot say enough about those celings! 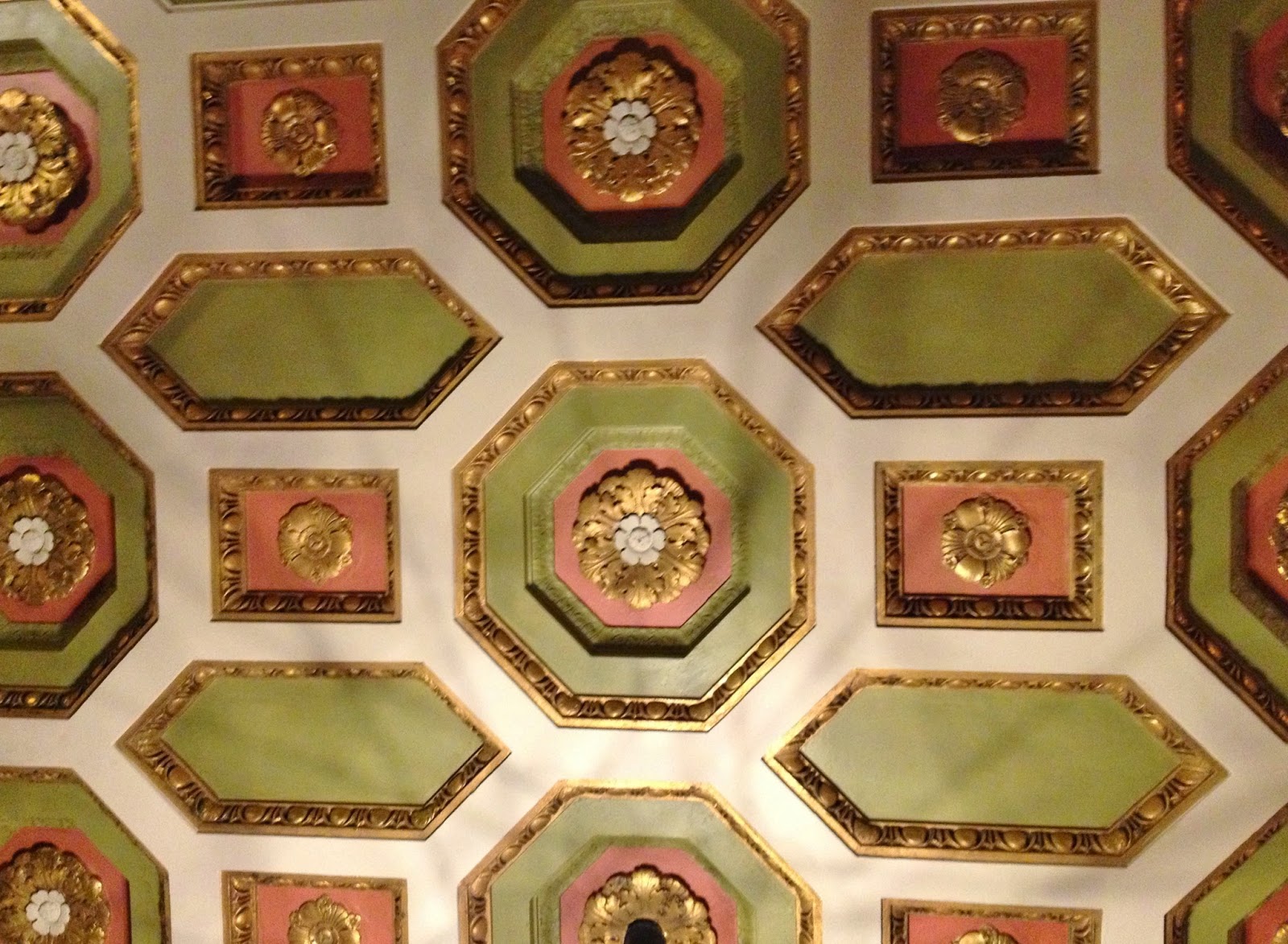 One was more splendid than the next. 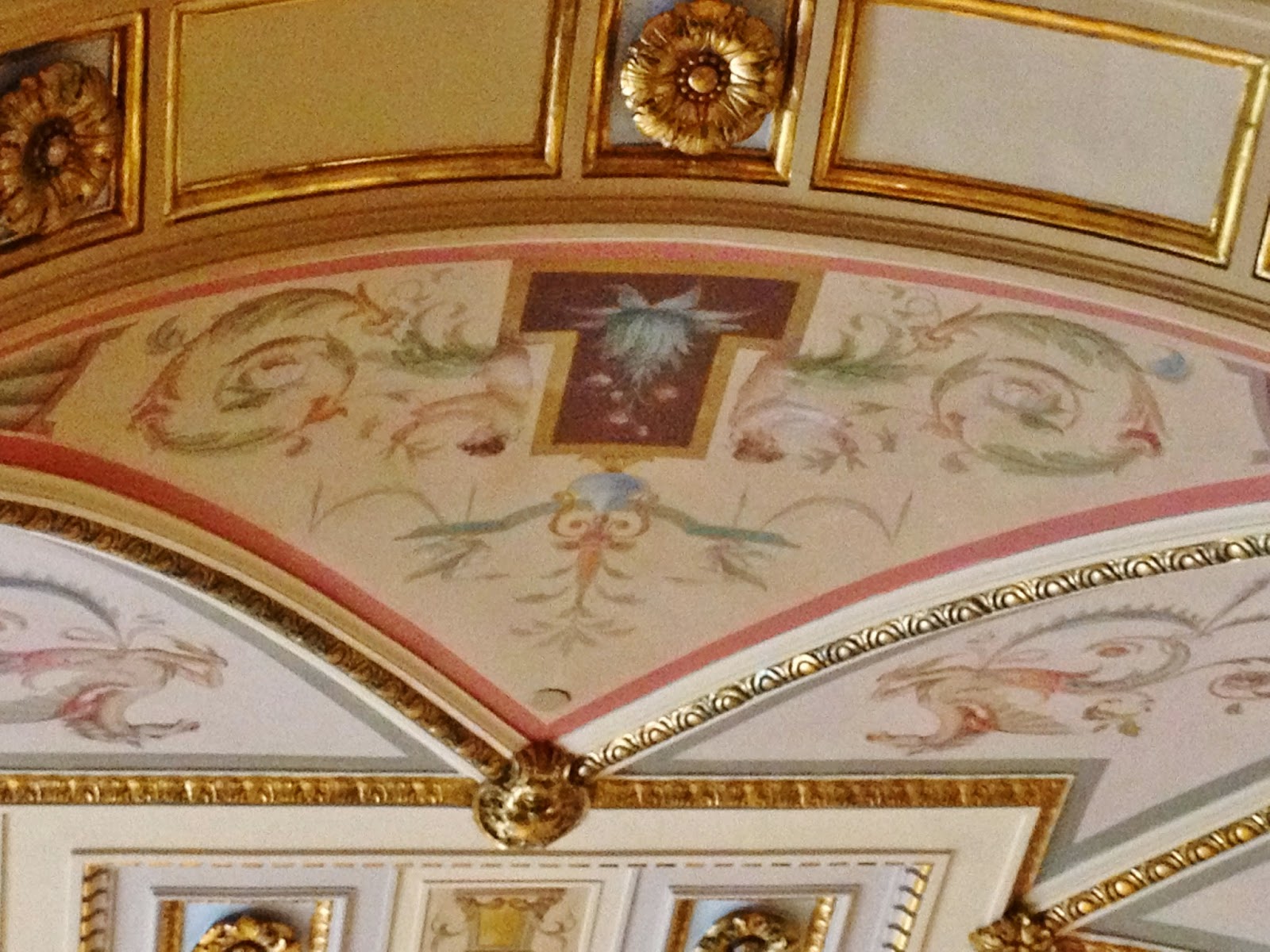 This ceiling was painted by a Venetian artist.  In fact over 75 artisans were brought in from Italy to help create this masterpiece resort.

The lantern shown below hangs at the end of the lobby . 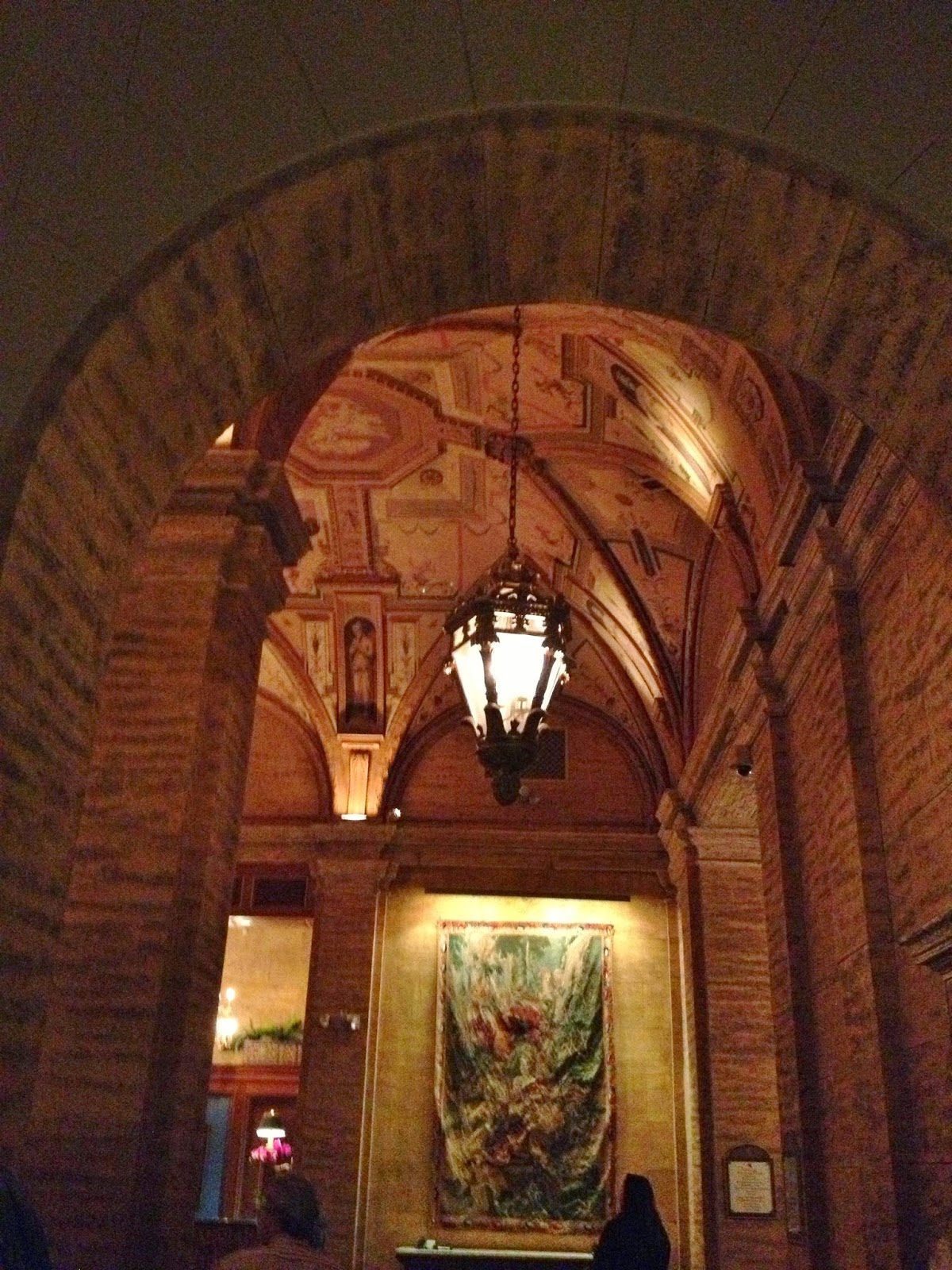 The incredible ceilings and lighting continued on the exterior as well. 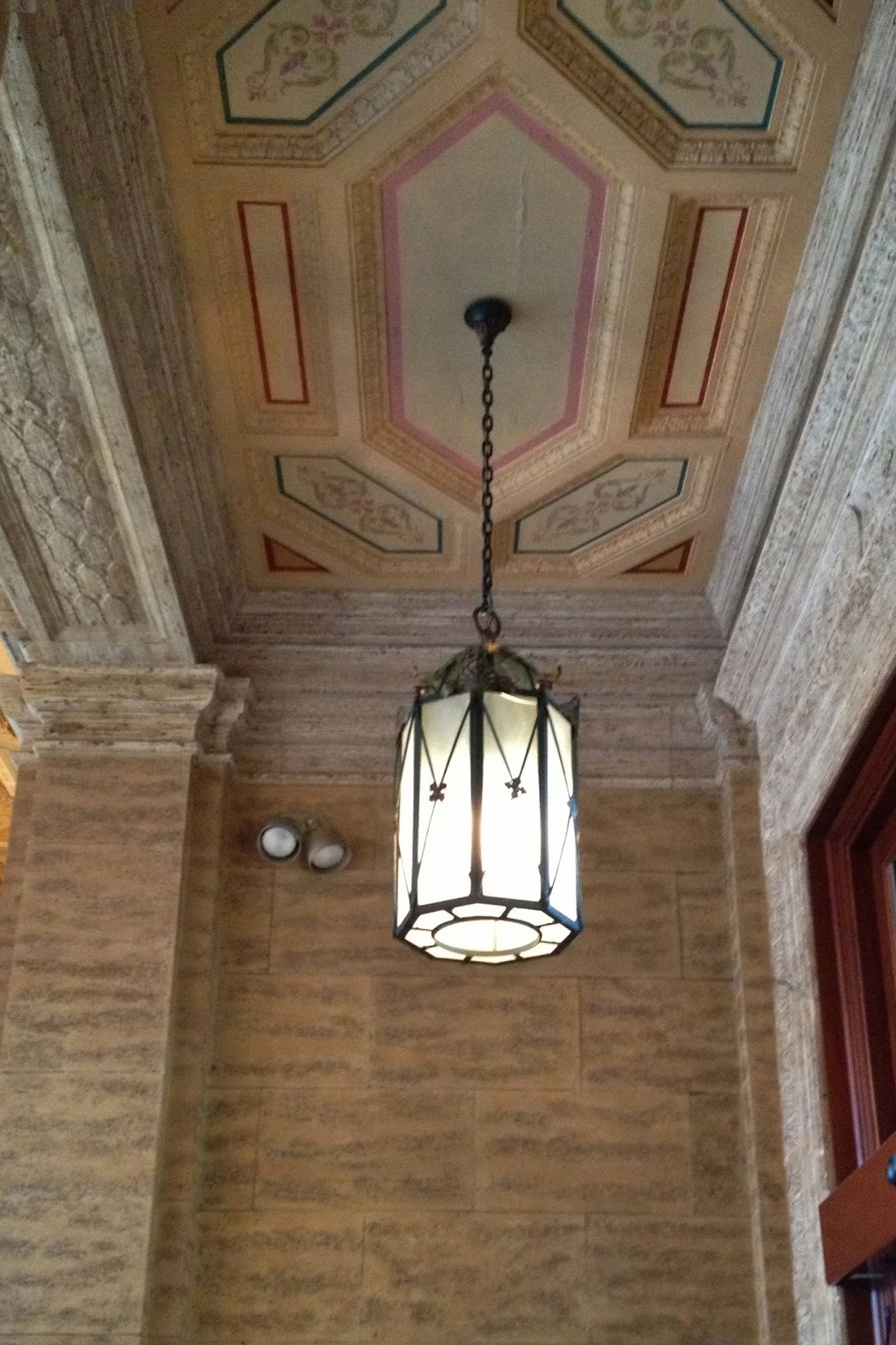 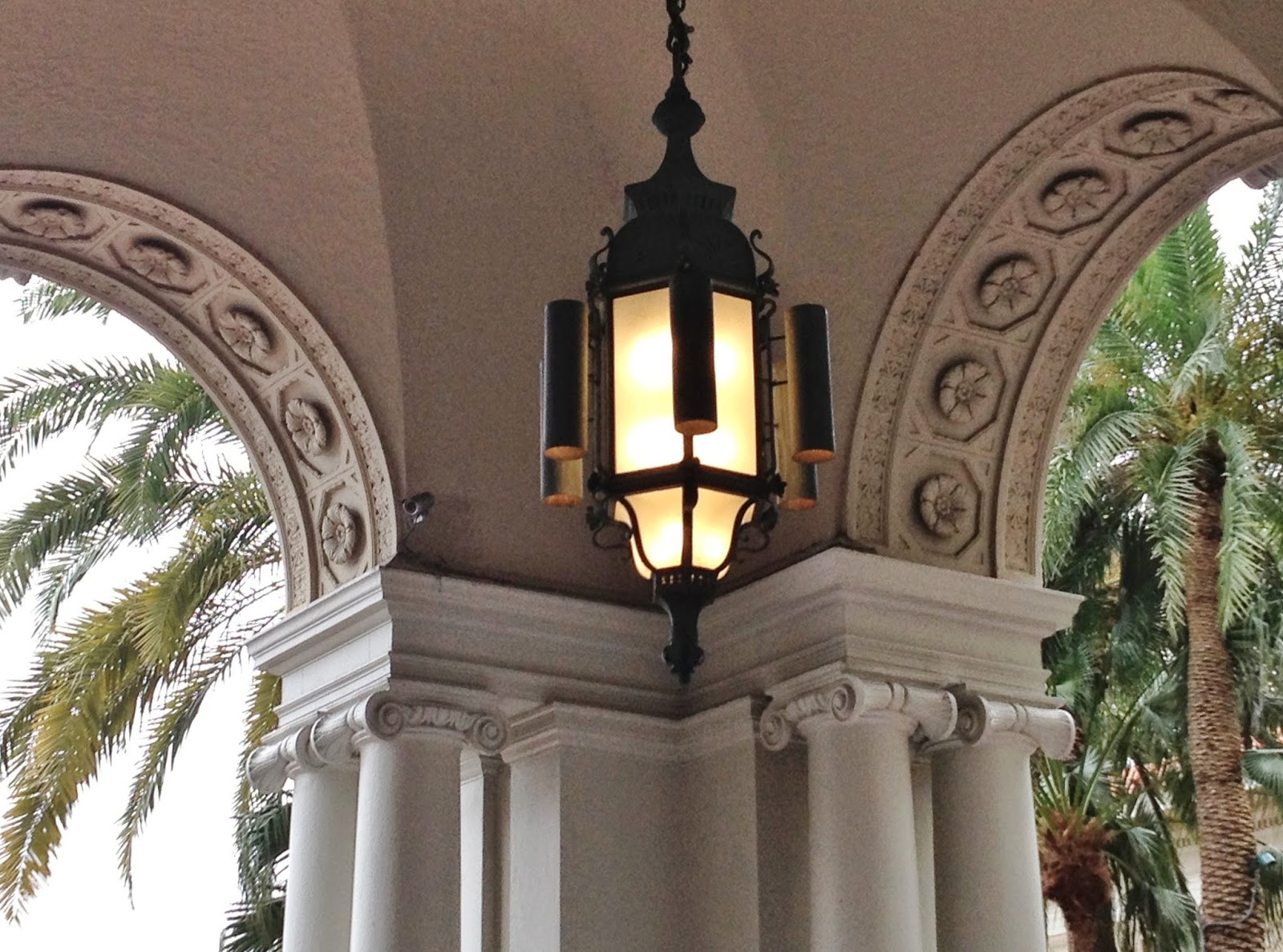 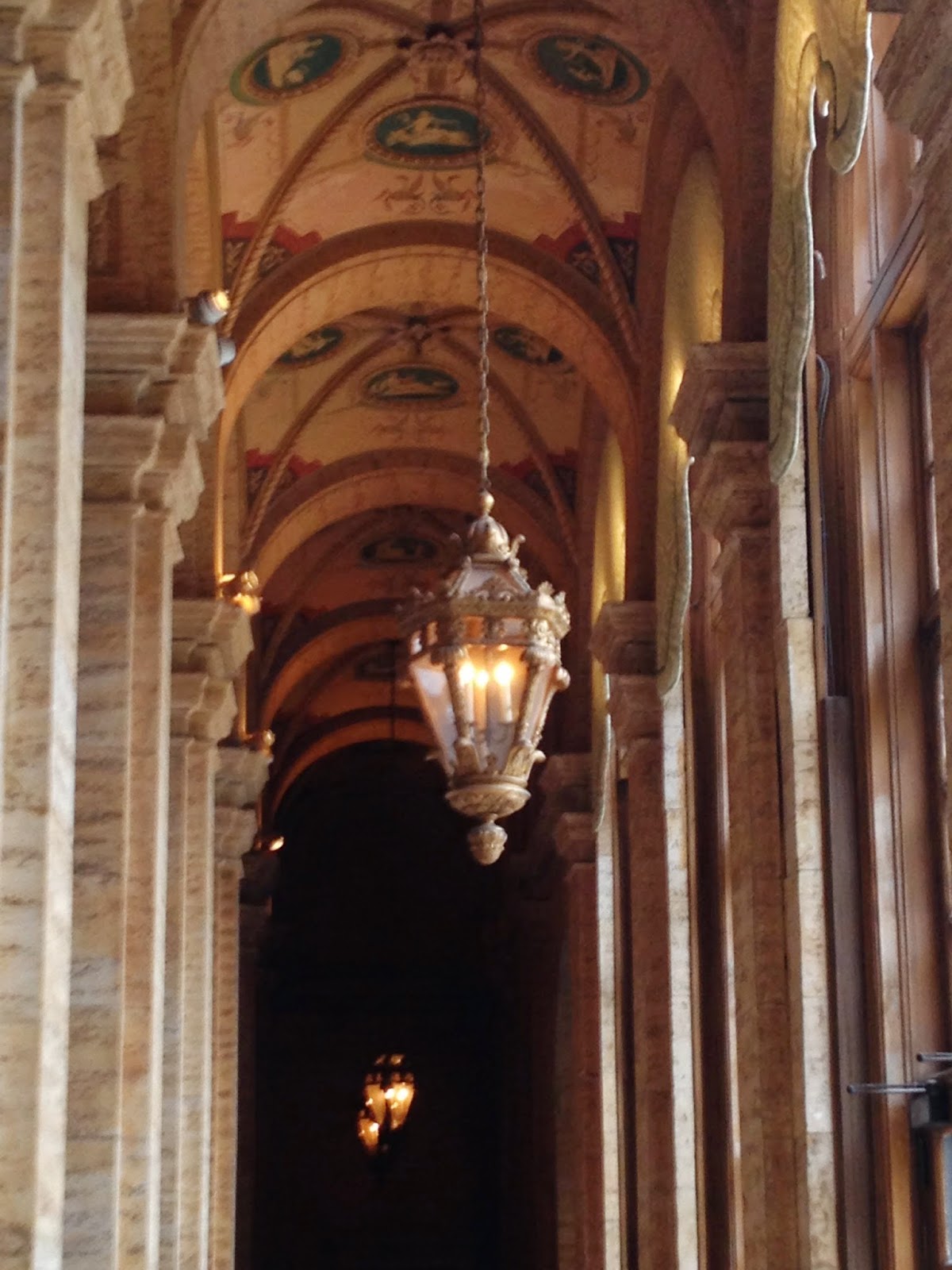 Though not as plentiful as the chandelier and lantern population, an occasional sconce lit up the hallways, like this one. 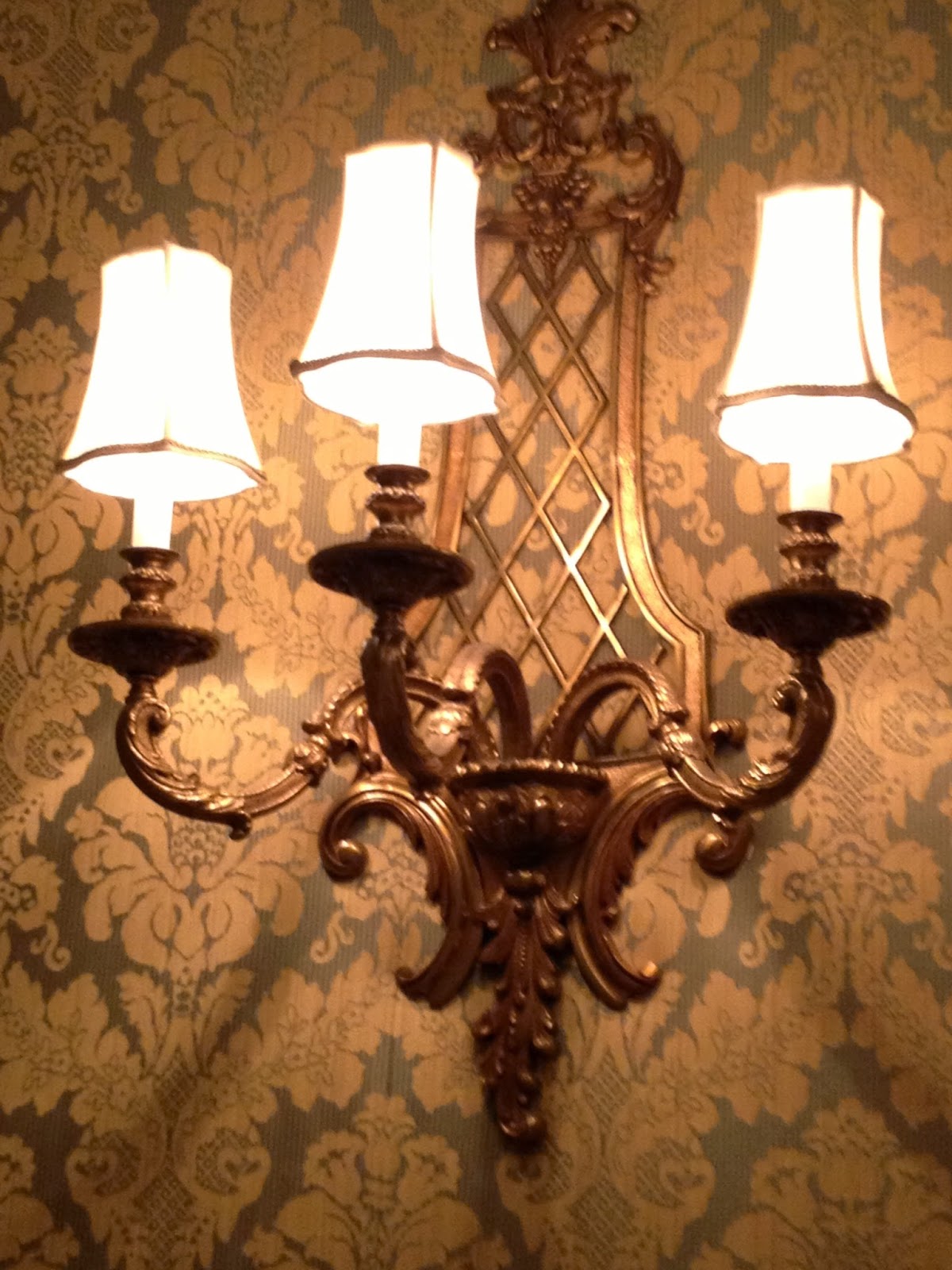 What did I learn from my visit to The Breakers?  Sometimes my clients will ask, do all my lighting fixtures in the same areas have to match?  What if all the chandeliers at The Breakers matched?  While there was a consistency of  a certain period and mulitples of the same chandelier,  the variety of styles used definitely created a more interesting element.

Like The Breakers, each area of your home is different and call for it's own type of fixture.  If you need a guideline, I would recommend that the period remain the same.  Otherwise have fun, don't be afraid to mix it up!

Remember the red glass shades on the chandelier at the steakhouse?  Once I put red shades on my own chandelier at Christmas.  The glow it gives is so delightful, I keep them on all year! 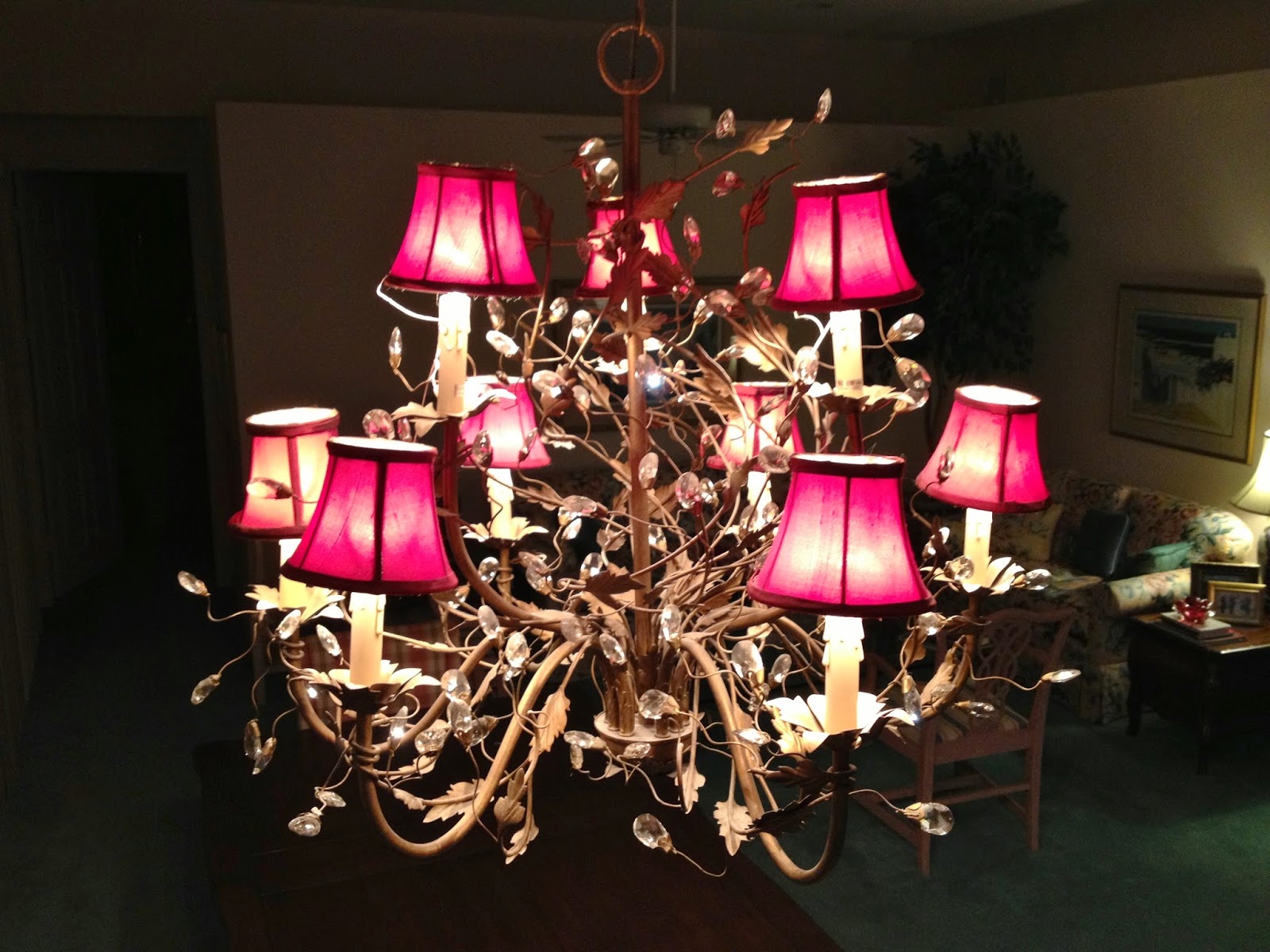 Most homes are not so grand as The Breakers so how can we  take the ideas from the ceiling designs at The Breakers and tweak them for our own homes?

In today's decorating ceilings are frequently painted in a contrasting color or faux finished in a pretty design.  Sometimes they are painted like the sky or defined by beautiful molding.  Adding a ceiling medallion is also a popular way to highlight a light fixture and add interest to a ceiling.

Inspiration  is not about duplication but about finding a way to take just a bit from here and there  bring it to life in your own way, in your own home.

I hope you have been inspired by this most exquiste hotel.  As always I invite you to share your experiences and thoughts in the comment box.  I look forward to hearing from you.

View my complete profile
To contact me or submit a question to Dear Decorator please email pictureprettyint at aol dot com.